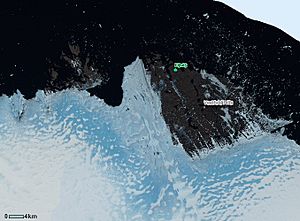 It is bounded on the west by Amery Ice Shelf, Mac. Robertson Land, and on the east by Wilhelm II Land.

Even though Australia claims the entirety of this land, it is home to Russian stations including Vostok Station (the coldest place on Earth) and Mirny Station which supplies it.

All content from Kiddle encyclopedia articles (including the article images and facts) can be freely used under Attribution-ShareAlike license, unless stated otherwise. Cite this article:
Princess Elizabeth Land Facts for Kids. Kiddle Encyclopedia.