Sayville is a hamlet and census-designated place in Suffolk County, New York, United States. Located on the South Shore of Long Island in the Township of Islip, the population of the CDP was 16,853 at the time of the 2010 census.

The earliest known inhabitants of Sayville were the Secatogue tribe of the Algonquian peoples.

Sayville was founded by John Edwards (b. 1738) of East Hampton, New York. He built his home, the first in Sayville, in 1761, located at what is now the northwest corner of Foster Avenue and Edwards Street. The house was destroyed by fire in March 1913. Another man, John Greene, settled what is now known as West Sayville in 1767.

The community had no formal name until 1838 when residents gathered to choose a name for their post office, which had opened on March 22, 1837. Until that time, Sayville was known informally as "over south". The townspeople held a meeting to decide on a name, and after Edwardsville and Greensville tied in a vote, one resident suggested "Seaville". According to historical accounts, the clerk at that particular meeting did not know how to spell and had to go home and look in an old Bible he had brought from England years before. In the Bible, the word "sea" was spelled "s-a-y",

that the name should stay "Sayville", as there were many "Seaville"s in the world but no "Sayville"s. As a result, the name stuck. Incidentally, in some very old Bibles, the town name is also spelled "S-a-v-i-l-l-e".

Sayville became important mainly for its timber and oysters. Beginning in 1868, when the South Side Railroad arrived, the hamlet became a summer tourist destination. Over 30 hotels were built in the area, which hosts a ferry to Fire Island. Between 1880 and 1930, many grand homes and estates were built in Sayville, including Meadow Croft, the home of John Ellis Roosevelt, a cousin of Theodore Roosevelt. Meadow Croft still stands and is part of Suffolk County's San Souci Lakes Nature Preserve.

In 1912 a German Telefunken wireless transmitter was built in Sayville (now West Sayville) to broadcast to Germany. In 1915 the transmitter allegedly relayed a message from the German embassy to "get Lucy", referring to the RMS Lusitania which was sunk on May 15. Whether the signals coming from the transmitter in Sayville authorized the attack or not, they caused concern for the US government, which dispatched Marines to ensure that encrypted messages were not sent. The station was seized by the government outright after war was declared in 1917. President Woodrow Wilson sent a contingent of Marines to seize the wireless station, making it the first hostile action taken by the United States against Germany during World War I. 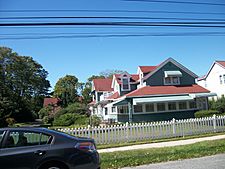 From 1919 to 1932 Sayville was home to Father Divine, a controversial African American religious leader who claimed to be God. His religious movement, which came to be called the International Peace Mission movement, managed a commune-like house on 72 Macon Avenue, which was the first black-owned residence in Sayville. At that time Sayville was predominantly a seasonal resort, and Father Divine's followers made good livings as native house sitters. Because followers turned over all of their profits to Father Divine, he was able to build several expansions on the house. He even bought an expensive Cadillac when neighbors complained about his noisy Hudson automobile.

Father Divine's ostentation annoyed the middle-class residents. Excess traffic that Father Divine attracted made him unpopular even to businesses he patronized with large cash purchases. Following a June 1932 trial and prison sentence for disturbing the peace, Father Divine moved to Harlem, New York, claiming that Sayville was racist. However, the commune remained on Macon Avenue for many years. Father Divine occasionally preached in Sayville afterward, but the home was only an outpost of his movement, not its headquarters.

In 1994, California State University at Fresno designated Sayville the "friendliest town in America".

Sayville is the embarkation point for ferries to the Fire Island communities of Cherry Grove and Fire Island Pines, both popular vacation communities for LGBT New Yorkers, as well as to Sailors Haven, which includes the Sunken Forest. The Sayville train station has connections to the ferries via taxi and van services.

The hamlet is bordered by the bay to the south, Sunrise Highway to the north, Brown Creek to the east, and Greenes Creek to the west.

There were 5,603 households, out of which 40.3% had children under the age of 18 living with them, 65.2% were married couples living together, 9.5% had a female householder with no husband present, and 22.3% were non-families. 17.5% of all households were made up of individuals, and 8.0% had someone living alone who was 65 years of age or older. The average household size was 2.92 and the average family size was 3.34.

All content from Kiddle encyclopedia articles (including the article images and facts) can be freely used under Attribution-ShareAlike license, unless stated otherwise. Cite this article:
Sayville, New York Facts for Kids. Kiddle Encyclopedia.