Fire Island Pines (often referred to as The Pines, simply Pines, or FIP) is a hamlet in the Town of Brookhaven, Suffolk County, New York, United States. It is located on Fire Island, a barrier island separated from the southern side of Long Island by the Great South Bay.

Fire Island Pines and the adjoining Cherry Grove are the areas most strongly associated with the gay community on Fire Island. The island has been referred to as America's first gay and lesbian town and served since the 1920s and 1930s as a refuge for vacationers and others who desired the more liberal attitude the island's occupants allowed.

The Pines, which has the most expensive real estate on Fire Island, has approximately 600 houses and a 100-unit condominium complex on its square mile of location. It has two-thirds of the swimming pools on Fire Island. Its summer seasonal population is between 2,500 and 3,000. In 2004, 12 people listed it as their full-time residence.

Transportation is via foot on the boardwalks. If a person wishes to carry groceries, the traditional way to do so is to pull toy wagons (commonly the popular Radio Flyer). 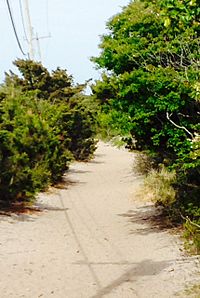 The Judy Garland Memorial Pathway (more commonly referred to as "the meat rack") linking together the communities of Cherry Grove and Fire Island Pines.

Fire Island Pines derives its name from the scrub pine trees in the area, which, according to legend, started growing after a ship with Christmas trees and holly foundered off its coast in the late 19th century.

The Pines was originally the site of a Coast Guard station built in 1876 and known as Lone Hill Saving Station. The area was purchased by the Home Guardian Company in 1924. As no development occurred the area became a popular nude beach. Squatters erected temporary buildings. The "harbor" is the area where all the commercial buildings are located including docks for yachts, the passenger ferry from Sayville and freight operations are located.

On November 14, 2011 a large fire destroyed the Pavilion, including its commercial tenants. That building had been built in 1980. Forty-three Long Island fire companies responded to the blaze, which began around 8 p.m., with 400 firefighters working in shifts through the night to contain and extinguish the fire.

Plans for development first began in 1952 when Warren and Arthur Smadbeck, doing business as the Home Guardian Company, announced plans to sell 122 lots in the new subdivision while building a private harbor for yachts, a large landing dock, and a private park facing the harbor. The Smadbecks, who sold more than 700,000 lots around the country, had purchased the property from the Sammis family, which had owned it since buying most of Fire Island in 1855 when they built the Surf Hotel near the Fire Island Light, in what is now the community of Kismet.

The basic Smadbeck layout of the Pines remains to this day, including the Botel which was designed to be a simple, no-frills, dormitory style accommodation for those who docked their yachts in the harbor.

The Botel and associated yacht club buildings burned on May 31, 1959.

Peggy Fears, a Broadway showgirl, had discovered Lone Hill on an outing to a neighboring Fire Island community. Fears built the original Yacht Club. Part of the construction was a cinderblock hotel which still stands today. She invested $10,000 and bought an inlet on Great South Bay. In 1959, she paid off the last of her debt on her property. It was then valued at $350,000.

While a resident of Fire Island, she had a stormy romantic relationship with Tedi Thurman. Thurman was interviewed about her life with Fears for Crayton Robey's documentary film, When Ocean Meets Sky (2003), which features Sara Ramirez as the voice of Peggy Fears. In 1966 she sold out her interest to John B. Whyte.

Former model John B. Whyte encouraged its reputation as a gay destination after buying the rebuilt Botel Pines and Dunes Yacht Club in the 1960s (Cherry Grove was already a gay destination when Whyte developed the Pines). Whyte bought the property after a May 31, 1959 fire destroyed the entire complex. The Botel, which was known as The Hotel Ciel from 2004 - 2012, is still the central landmark and only hotel in the Pines.

The conversion to a gay destination proved divisive among the initial owners. A large sign near the dock headlined, "Welcome to Fire Island Pines A Family Community." It also proclaimed "We believe in a community that is clean both morally and physically."

Whyte bent rules to accommodate the gay crowd. "We had a hully-gully line right here in the restaurant. I would put a girl at each end -- men weren't allowed to dance with men back then -- and everyone would have a good time."

Whyte, who owned 80 percent of the commercial property in the Pines, instituted the community’s central social activity schedule of "Low Tea" (drinks—particularly the "Blue Whale" cocktail of Curaçao liqueur and vodka that turned patrons' tongues blue—at the Blue Whale from 5 PM to 8 PM) followed by "High Tea" (drinks at the Pavilion from 8 to 10 PM) followed by an evening of dancing at the Pavilion (all of which were Whyte establishments).

For three decades, John B. Whyte helped attract a celebrity crowd and developed the area with a more sophisticated cachet. In 2003, Whyte decided to sell all of his commercial holdings and sought out a specific buyer: Eric von Kuersteiner, who had been frequenting the Pines since the late 1980s. Whyte had an asking price of $11 million. His broker negotiated the sale for $9 million.

In 2009, Matt Blesso, Andrew Kirtzman, Seth Weissman were a trio of investors known as FIP Ventures.

Life in the Pines 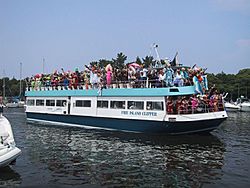 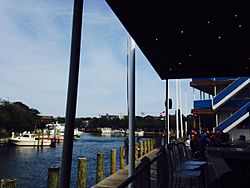 View of the Fire Island Pines Marina from a nearby bar

While all of Fire Island may have an official year-round population of 310, the summer population swells to much higher levels, especially on weekends. In the Pines, the large houses are filled with summer shares and a four-bedroom house can easily contain eight people at a time. The population is primarily gay men 20–50 years old. It is affectionately referred to as "Chelsea with sand," with reference to one of Manhattan's gayer neighborhoods.

There are a number of high-profile events and fundraisers that occur during the summer season. Some of the bigger events include Fire Island Dance Festival, Invasion, Pines Party, and Ascension.

The Fire Island Dance Festival is produced by Dancers Responding to AIDS, a program of Broadway Cares/Equity Fights AIDS.

The Invasion of the Pines is a drag-queen parade held each year on July 4, commemorating the time when Whyte refused service to drag queen Terry Warren. After promenading through the Pines, the drag queens from Cherry Grove proclaim victory and return to Cherry Grove.

Pines Party, an all-night dance party held each July on the beach, is the reincarnation of GMHC's former Morning Party fundraiser held on the beach. Morning Party had evolved into a major circuit party and was GMHC's biggest fundraising event. However, the party itself developed a reputation that contradicted GMAC's mission statement.

Despite the loss of the high-profile sponsor the party continued under the name of the Pines Party which is held on the last weekend of July. Proceeds go to lower profile organizations of the Stonewall Community Foundation (which uses the money to help those with HIV) and the Fire Island Pines Property Owners Association Charitable Foundation (which uses the funds to make improvements to the common areas).

von Kuersteiner started Ascension Weekend, a not-for-profit charitable three-day weekend event, to serve as another travel and tourist attraction in the month of August, a month which had been very lackluster in the past. Ascension debuted in 2006, and brought thousands of new faces to the Pines beach. It has played host to award-winning DJs such as Freemasons (band).

The Fund in the Sun Foundation was established in 2006 as a direct result of Ascension. Acting as the parent charity, it has donated over $750,000 of Ascension net proceeds to many LGBT charities like Hetrick Martin Institute, Trevor Project, National Gay and Lesbian Task Force, Live Out Loud, Standing Tall and Friends in Deed.

Fire Island Pines is typically accessed by boat, with most visitors and residents utilizing a nearby ferry service in Sayville. Sayville itself is accessible by train, including from New York City. The Pines had been served with regularly scheduled seaplanes during the season from New York City. That service ended after the September 11 attacks, but returned with some regularity at the end of the 2015 season.

With limited exceptions, motor vehicles are not permitted in the Pines, and bicycles are uncommon.

View of the Fire Island Pines Marina from a nearby bar

Fire Island Pines is only accessible by water with most residents and visitors using a passenger ferry or private water taxi. A small marina is also available. There are no private vehicles in this part of Fire Island, although police and service vehicles are seen on the beach from time to time. The Pines has no paved roads and the cottages and beach are only accessible using a series of wooden boardwalks.

Passengers connecting between the Sayville LIRR station and the Sayville Ferry service can pay for a shuttle van or taxi ride, or may walk or ride their bicycle the mile and a half distance. People driving cars may park in large, gravel parking lots across the street from the ferry dock.

Visitors arriving by car may park at the Robert Moses State Park “Field Five” parking lot. After reaching the Fire Island Lighthouse, the Fire Island Water Taxi will ferry paying customers to the Pines. A water taxi provides short-distance transportation for those moving from place to place along the coast of Fire Island. The fare and schedule for the taxi service varies by season.

All content from Kiddle encyclopedia articles (including the article images and facts) can be freely used under Attribution-ShareAlike license, unless stated otherwise. Cite this article:
Fire Island Pines, New York Facts for Kids. Kiddle Encyclopedia.