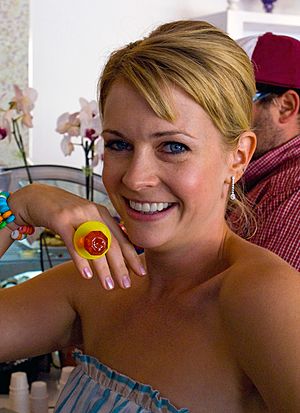 Melissa Joan Catherine Hart (born April 18, 1976) is an American actress. She was born and raised in Long Island, New York.

She played the title roles in the television series Clarissa Explains It All and Sabrina, the Teenage Witch. In 1999 she played the lead role in the movie Drive Me Crazy. From 2010-2015, she starred as Mel Burke in the ABC Family show Melissa & Joey.

All content from Kiddle encyclopedia articles (including the article images and facts) can be freely used under Attribution-ShareAlike license, unless stated otherwise. Cite this article:
Melissa Joan Hart Facts for Kids. Kiddle Encyclopedia.