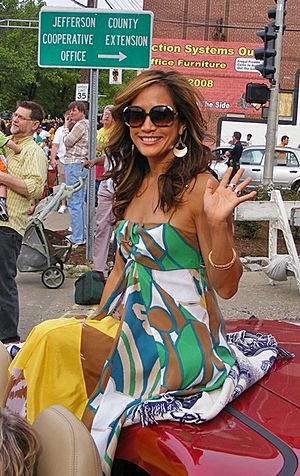 Carrie Ann Inaba (born January 5, 1968) is an American television personality, choreographer, dancer, actress and singer. She is best known for her work on ABC's Dancing with the Stars. She also co-hosted and moderated the show The Talk on CBS.

Inaba began her career as a singer in Japan. She introduced herself by way of the show In Living Color (1990-1992).

Inaba was born and raised in Honolulu, Hawaii.

All content from Kiddle encyclopedia articles (including the article images and facts) can be freely used under Attribution-ShareAlike license, unless stated otherwise. Cite this article:
Carrie Ann Inaba Facts for Kids. Kiddle Encyclopedia.