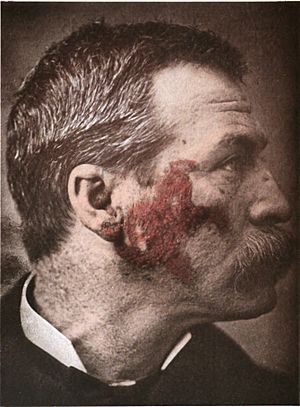 A hand-colored photo of 1886, showing a lupus-caused rash (the red parts in the photo)

Lupus, or Lupus erythematosus, is a disease of the immune system. It is chronic, which means it does not go away. It is an autoimmune disease, where the person's immune system attacks their own body.

Lupus takes its name from the Latin word "lupus", meaning wolf. This is because a lupus-caused rash on a person's face makes the person's face look like the face of a wolf. In the United States alone, there may be 270,000 to 1.5 million (1,500,000) people with lupus. Worldwide, it is estimated (not known for sure, but a good guess) that over 5 million (5,000,000) people living with lupus. The disease mainly affects young women, but men can be affected as well.

All content from Kiddle encyclopedia articles (including the article images and facts) can be freely used under Attribution-ShareAlike license, unless stated otherwise. Cite this article:
Lupus Facts for Kids. Kiddle Encyclopedia.