Smithtown is a town in Suffolk County, New York, United States, on the North Shore of Long Island. It is part of the New York metropolitan area. The population was 117,801 at the 2010 Census.

The census-designated place (CDP) of Smithtown lies within the town's borders. 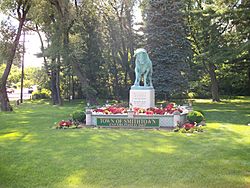 Statue of the Smithtown Bull that Richard Smith was said to have ridden in order to claim the land that became the Town of Smithtown.

Smithtown originally, known as "Smithfield", was first settled around 1665. Local legend has it that, after rescuing a Native American chief's kidnapped daughter, Richard Smith was told that the chief would grant title to all of the land Smith could encircle in one day "on a bull". Smith chose to ride the bull on the longest day of the year (summer solstice), to enable him to ride longer "in one day". The land he acquired in this way is said to approximate the current town's location. There is a large anatomically correct statue of Smith's bull, known as Whisper, at the fork of Jericho Turnpike (New York State Route 25) and St. Johnland Road (New York State Route 25A).

The border between Smithtown and the town of Huntington is partially defined by Bread and Cheese Hollow Road (Suffolk County Road 4), so named after Bread and Cheese hollow, which according to legend is where Smith stopped on his ride to have a lunch of bread and cheese. The road is reputed to follow part of his original ride. The border between Smithtown and Huntington was also the site of Fort Salonga, a British fort that was the site of a battle of the American Revolution during 1781.

The Town of Smithtown is also home to the Kings Park, Smithtown, and Saint James stations of the Long Island Rail Road's Port Jefferson Branch.

The Town of Smithtown is served entirely by Suffolk County Transit bus routes. 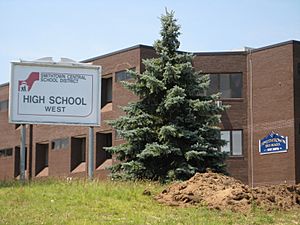 All content from Kiddle encyclopedia articles (including the article images and facts) can be freely used under Attribution-ShareAlike license, unless stated otherwise. Cite this article:
Smithtown, New York Facts for Kids. Kiddle Encyclopedia.