Amityville is a village in the town of Babylon in Suffolk County, New York, in the United States. The population was 9,523 at the 2010 census.

Huntington settlers first visited the Amityville area in 1653 as a source of salt hay. Chief Wyandanch granted the first deed to land in Amityville in 1658. The area was originally called Huntington West Neck South (it is on the Great South Bay and Suffolk County, New York border in the southwest corner of what once called Huntington South but is now the Town of Babylon. According to village lore, the name was changed in 1846 when residents were working to establish its new post office. The meeting turned into bedlam and one participant was to exclaim, "What this meeting needs is some amity". Another version says the name was first suggested by mill owner Samuel Ireland to name the town for his boat, the Amity.

The place name is strictly speaking an incidental name, marking an amicable agreement on the choice of a place name. The village was formally incorporated on March 3, 1894. In the early 1900s Amityville was a popular tourist destination with large hotels on the bay and large homes. Annie Oakley was said to be a frequent guest of vaudevillian Fred Stone. Will Rogers had a home across Clocks Boulevard from Stone. Gangster Al Capone also had a house in the community. Amityville has been twinning with Le Bourget, France since 1979. 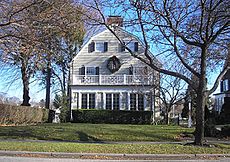 The Amityville Horror house in December 2005. The house's signature quarter moon windows on the top floor were replaced in 1990.

Amityville is the setting of the book The Amityville Horror by Jay Anson, which was published in 1977 and had been adapted into a series of films made between 1979 and 2015.

The house featured in the novel and its film versions still exists, but has been renovated and the address changed in order to discourage tourists from visiting it. The Dutch Colonial Revival architecture house built in 1927 was put on the market in May 2010 for $1.15 million and sold in September for $950,000.

The Village of Amityville is bordered to the west by East Massapequa (in Nassau County), to the north by North Amityville, to the east and south by Copiague, and to the south by the Great South Bay. 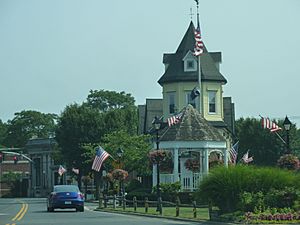 The Triangle in downtown Amityville

78.7% of the population had lived in the same house 1 year & over. 14.9% of the entire population were foreign born and 21.6% of residents at least 5 years old spoke a language other than English at home.

Amityville is served by the Babylon Branch of the Long Island Rail Road. The station is a hub for buses in the area:

All content from Kiddle encyclopedia articles (including the article images and facts) can be freely used under Attribution-ShareAlike license, unless stated otherwise. Cite this article:
Amityville, New York Facts for Kids. Kiddle Encyclopedia.