Gilgo is a hamlet and census-designated place (CDP) in the Town of Babylon in Suffolk County, New York, United States. The population was 131 at the 2010 census.

Prior to the 2010 census, the area was part of a larger CDP called Gilgo-Oak Beach-Captree. The Gilgo CDP contains several small beach communities on a barrier island along the southern edge of Long Island. In order from west to east, these include West Gilgo (on the Nassau/Suffolk county border), Gilgo Beach, and Cedar Beach (no residences). To the east along the beach is the CDP of Oak Beach. 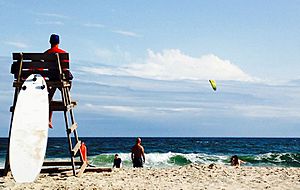 The census numbers are presumably for full-time inhabitants; many of these houses are second homes and not primary residences, although the proportion of seasonal residents is decreasing.

The land for these communities is not privately owned, but leased from the State of New York through the year 2050. However, the residences on the property are owned. If the leases are not renewed at some point in the future, the owners will have to move the houses elsewhere, similar to what happened at High Hill Beach when Jones Beach State Park was created.

All content from Kiddle encyclopedia articles (including the article images and facts) can be freely used under Attribution-ShareAlike license, unless stated otherwise. Cite this article:
Gilgo, New York Facts for Kids. Kiddle Encyclopedia.