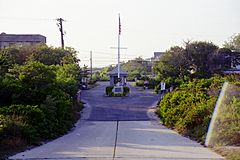 West Gilgo Beach is a small private gated community located in the town of Babylon, in Suffolk County, New York, United States. It is part of the Gilgo census-designated place.

Originally almost entirely a summer community, over half of the houses are now winterized, and there is a mix of full-time and second home residents. The community hosts a small non-denominational church, a self-service library, an unmanned post office, and small firehouses that have hoses on carts. Residents depend on central well water and individual septic tanks. Cable television remains inaccessible.

The land is not owned by the residents, but is on long term lease from the Town of Babylon. In the early 1990s, there was litigation by New York State to not extend the lease. After much negotiation, the lease was renewed, with a ramp up in costs.

In July 2011, West Gilgo Beach residents united to beautify the community via a large-scale mural painting in the beach-access tunnel.

All content from Kiddle encyclopedia articles (including the article images and facts) can be freely used under Attribution-ShareAlike license, unless stated otherwise. Cite this article:
West Gilgo Beach, New York Facts for Kids. Kiddle Encyclopedia.