Jones Beach State Park (colloquially, "Jones Beach") is a state park of the U.S. state of New York. It is in southern Nassau County, in the hamlet of Wantagh, on Jones Beach Island, a barrier island linked to Long Island by the Meadowbrook State Parkway, Wantagh State Parkway, and Ocean Parkway.

The park – 6.5 miles (10.5 km) in length – is renowned for its beaches (which, excepting the beach on Zachs Bay, face the open Atlantic Ocean) and furnishes one of the most popular summer recreational locations for the New York metropolitan area. It is the most popular and heavily visited beach on the East Coast, with an estimated six million visitors per year.

Northwell Health at Jones Beach Theater, an outdoor arena in the park, is a popular musical and concert venue. The park also includes a two-mile (3.2 km) long boardwalk. It once featured dining and catering facilities that were popular sites for private parties and weddings; these have been shut down.

Jones Beach is named after Major Thomas Jones, a major in the Queens County militia in the 1600s who established a whaling station on the outer beach near the site of the present park.

The park was created during Robert Moses' administration as President of the Long Island State Park Commission as part of the development of parkways on Long Island. Moses' first major public project, Jones Beach is free from housing developments and private clubs, and instead is open for the general public. Several homes on High Hill Beach were barged further down the island to West Gilgo Beach to make room for the park.

When Moses' group first surveyed Jones Island, it was swampy and only two feet (0.61 m) above sea level; the island frequently became completely submerged during storms. To create the park, huge dredgers worked day and up to midnight to bring sand from the bay bottom, eventually bringing the island to 12 feet (3.7 m) above sea level. Another problem that followed was the wind — the fine silver beach sand would blow horribly, making the workers miserable and making the use of the beach as a recreational facility unlikely. Moses sent landscape architects to other stable Long Island beaches, who reported that a beach grass (Ammophila arenaria), whose roots grew sideways in search of water, held dunes in place, forming a barrier to the wind. In the summer of 1928, thousands of men worked on the beach planting the grass by hand.

Built in the 1920s, many of its buildings and facilities feature Art Deco architecture. In the center of a traffic circle that he planned as a terminus for the Wantagh State Parkway, Moses ordered the construction of an Italianate-style water tower to serve as a central feature of the park. Two large bathhouses are also prominent features within the park. After rejecting a number of submissions by architects for the bathhouses, Moses selected the designs of the young and relatively inexperienced Herbert Magoon. Moses also picked out building materials - Ohio Sandstone and Barbizon brick - two of the most expensive materials available.

The park opened to the public on August 4, 1929, along with the causeway that provided automobile access from the mainland of Long Island. The causeway was the first section in what was to become the Wantagh State Parkway. Unusually for the time, no carnival-style amusements were allowed in the park area. 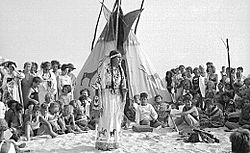 The Indian Village at Jones Beach was created as a Plains Indian village, with three large tipis. The large Council Tipi contained museum cases with artifacts borrowed from the American Museum of Natural History. The other tipis served as club houses for the children.

Yellow Robe taught tens of thousands of school children and several generations of New Yorkers about Native American history and culture. She primarily told stories and folklore of the Lakota and local Eastern Woodlands tribes. Rosebud recalled, "When I first lectured to public school classes in New York, many of the smaller children hid under their desks, for they knew from the movies what a blood-thirsty scalping Indian might do to them."

Yellow Robe dressed in a 19th-century Lakota Indian costume: a deerskin dress, leggings, and moccasins, with a feathered warbonnet, not customarily worn by women. Rosebud taught children about Native American culture through stories and legends Rosebud and her sisters heard from her father, handicraft, games, and songs. Each year ended with the Annual American Indian Art Exhibit, where the projects the children had been working on were showcased and judged. Winners were awarded with authentic Native American artifacts which were then displayed in participating local schools.

During the winter season, dressed in tribal costume, Yellow Robe visited schools and public libraries to tell Lakota stories and legends. In the summer of 1932, Rosebud staged a ceremony, characterized as a "Peace Council Fire", that attracted a crowd estimated at 1,000 people, including 300 children.

Bathers at Jones Beach State Park can choose from 6.5 miles (10.5 km) of ocean beach frontage and one-half mile (0.80 km) of bay frontage, on Zachs Bay, which was developed for still water bathing.

The primary buildings on the Jones Beach site are the two enormous bathhouses (west and east) and the park's large water tower, all built to Moses' specifications. The 188-foot (57 m) water tower, built in 1930 to resemble the bell tower of St Mark's Basilica in Venice, underwent a $6.1 million restoration in 2010. Large mosaics on the Central Mall Walkway near the water tower were restored in 2015; the $177,000 mosaic restoration was part of a larger $65 million refurbishment of the park announced in 2014. 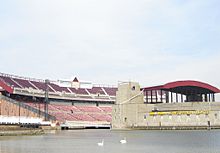 One-half mile (0.80 km) north of the beach, overlooking Zachs Bay, is the 15,200-seat Nikon at Jones Beach Theater, formerly known as the Jones Beach Marine Theater. This outdoor amphitheatre opened in 1952 and hosts numerous world-famous musicians during the summer months. It is directly across the street from the ocean and is outdoors in an open natural environment. It replaced a wooden structure built around 1930 which was destroyed by a disastrous hurricane in 1937.

A par 3 Pitch and Putt Course, advertised as "play[ing] differently each day, depending upon the prevailing winds", is located adjacent to the boardwalk and Atlantic Ocean. Basketball, paddle tennis, and shuffleboard facilities are also available. 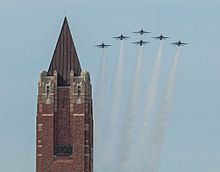 The USAF Thunderbirds, participating in the Bethpage Air Show, pass near the park's water tower in 2015.

Since 2004, Jones Beach has hosted the Bethpage Air Show during the last weekend of May (Memorial Day weekend). The air show is one of the largest in the United States, and was attended by 231,000 people in 2015.

There are multiple concession stands along the boardwalk in season. A few of the larger concessions stay open past the main summer season. Beach dining and catering facilities no longer exist at Jones Beach.

Jones Beach formerly featured The Boardwalk Cafe, a large restaurant with an expansive ocean view, built in 1966 and demolished in 2004 due to damage from erosion. It was intended to be replaced with a $40 million, 1,500-seat, 70,000-square-foot (6,500 m2) restaurant/catering hall called "Trump on the Ocean", to be operated by then-real estate mogul (and future president) Donald Trump and catering impresario Steven Carl. The project was stalled for several years due to legal battles over permits required for the restaurant's planned basement, and was eventually cancelled in the aftermath of Hurricane Sandy.

The West Bath House was home to a Friendly's ice cream parlor on the upper level; the patio outside overlooks both the pool and the ocean.

The Theodore Roosevelt Nature Center at Jones Beach State Park includes an exhibit area which depicts a variety of marine habitats, such as the South Shore Estuary Reserve, the seashore, and the dune environment. Inside the building, children may feel live marine animals and look through a microscope; outdoors, visitors may dig up whale bones in the Discovery Bone Cove, walk through a butterfly garden, view a shipwreck, or walk along a boardwalk through the dune environment. The center also offers interpretive programs for organized groups and the general public.

Jones Beach State Park offers numerous amenities, many of which meet the Americans with Disabilities Act accessibility standards. Examples of accessible amenities include:

Jones Beach's West End originally featured two parking fields known as West End 1, which was closed permanently in 1992 and replaced by the Theodore Roosevelt Nature Center after lying abandoned for nearly a decade, and West End 2, which lies at the westernmost area of the state park adjacent to the jetty on Jones' Inlet. West End 2 is currently a designated surfing area, which is open to stargazers and fisherman at night and bird watchers and other naturalists by day. The West End 2 beach was closed in April 2009 because of the state fiscal crisis. The West End 2 parking field along with the Field 1 are the two largest ocean front parking areas currently extant in the park.

Jones Beach is accessible by car, boat, bicycle, and in the summer season by bus. Most visitors arrive by car via the Meadowbrook State Parkway or the Wantagh State Parkway; the recreation area is also accessible via the Ocean Parkway. A significant portion of visitors take the Long Island Rail Road (LIRR) to Freeport and then a bus to Jones Beach. Boaters often anchor on the bay side of Jones Beach (i.e., Zachs Bay), especially at night during a show such as the fireworks show on July 4.

A greenway alongside the Wantagh State Parkway allows bicycling, skating or walking about four miles (6.4 km) from Cedar Creek County Park on Merrick Road into Jones Beach. A similar route to Long Beach is under consideration.

As of 2016, parking costs $10 ($8 when the beach is closed), though a New York State Empire Passport ($65) can be used to park for free. Parking fees are charged from 6 a.m. to 6 p.m. on Saturdays, Sundays and holidays, and from 8 a.m. to 4 p.m. weekdays from Memorial Day through Columbus day. The six main public parking areas along the boardwalk can handle 14,302 vehicles. The center parking fields are the busiest on summer weekends. Bicycle parking is free, but bike riding within the park is not allowed during the summer and bikes must be locked at the racks by the boardwalk.

All content from Kiddle encyclopedia articles (including the article images and facts) can be freely used under Attribution-ShareAlike license, unless stated otherwise. Cite this article:
Jones Beach State Park Facts for Kids. Kiddle Encyclopedia.