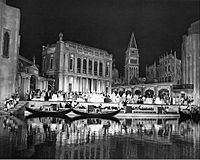 Performance of A Night in Venice in July 1953

Opened in June 1952 as the New Jones Beach Marine Stadium, the venue originally had 8,200 seats and hosted musicals. Moses had several boxes designated for his own use, and Moses' friend Guy Lombardo performed often in the early years.

The opening show was the operetta extravaganza A Night in Venice by Johann Strauss II, produced by film producer Mike Todd, complete with floating gondolas and starring Enzo Stuarti, Thomas Hayward, Norwood Smith and Nola Fairbanks. During one of these Lombardo performances, the early phonograph recording star Billy Murray died of a heart attack in 1954.

Lombardo's final show was the 1977 production of Finian's Rainbow, with Christopher Hewett in the title role. After Lombardo's death in 1977, the series resumed in 1978 with Annie Get Your Gun, starring Lucie Arnaz. Beginning in the 1980s, the primary focus of the venue would change to concerts.

In 1991 and 1992, under contract from concert promoter Ron Delsener, the theatre underwent an extensive renovation, adding a second level and increasing the capacity to 11,200 seats. The capacity was expanded again in 1998 to hold 15,000 seats.

The theater's original design featured a moat; the stage was actually situated on Zachs Bay and was separated from the beach. Performers used an underwater tunnel that connected the main theatre to the stage or was brought to the stage by boat, and some scenes had floating scenery. Each night, Guy Lombardo would arrive in one of his luxurious speed boats, hop out and take his place in front of the orchestra and the show would start. The Guy Lombardo Orchestra would pass through the moat on a yacht during the intermissions and play tunes while floating in front of the audience. The moat was covered or filled in during the first renovation and seats were installed closer to the stage. 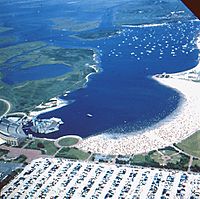 In October 2012, Hurricane Sandy did major damage to the theater. Various structures were destroyed and much of the lower part of the arena was flooded, including the lower section of seats which were flooded more than halfway up. The venue reopened on May 31, 2013, after a $20 million rehabilitation project.

All content from Kiddle encyclopedia articles (including the article images and facts) can be freely used under Attribution-ShareAlike license, unless stated otherwise. Cite this article:
Jones Beach Theater Facts for Kids. Kiddle Encyclopedia.