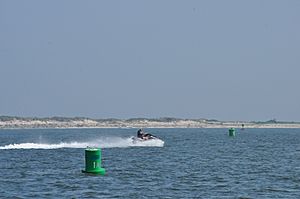 South Oyster Bay or East Bay is a natural harbor along the western portion of the south shore of Long Island in New York in the United States. The harbor is formed by Jones Beach Island, a barrier island on the southern side of Long Island. It is approximately 3 mi (5 km) wide between the two islands, and approximately 15 mi (24 km) long. It links to Great South Bay on its eastern end and opens to the Atlantic Ocean through inlets on either side of Jones Beach Island.

The name refers to its history as one of the finest oyster beds in the world.

All content from Kiddle encyclopedia articles (including the article images and facts) can be freely used under Attribution-ShareAlike license, unless stated otherwise. Cite this article:
South Oyster Bay Facts for Kids. Kiddle Encyclopedia.