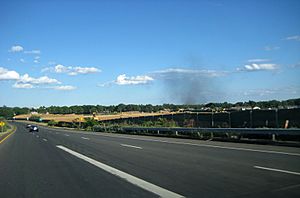 LIE Service Road at Exit 49S. The site of the future Canon USA headquarters is visible, as is smoke from a fire in Farmingdale.

Melville is an affluent hamlet and census-designated place (CDP) in the Town of Huntington in Suffolk County on Long Island, New York, in the United States. The population was 18,985 at the 2010 census.

In the past, Melville and some of its neighbors have proposed incorporating as the Incorporated Village of Half Hollow Hills. These proposals were all mothballed.

Melville lies directly east of the boundary with Nassau County. The Long Island Expressway (LIE) and Northern State Parkway, two of the country's busiest highways and major points of entry in and out of New York City, pass through Melville. Melville is located immediately off Exit 49 of the LIE. New York State Route 110 runs through the center of Melville.

The area was known to the Native Americans as Sunsquams. In the 17th century it was known as Samuel Ketcham's Valley, named for a local resident. Afterwards it was known as Sweet Hollow. This name was replaced by Melville in school records in 1854. There is some debate as to the origin of the Melville name. It may be derived from the Latin for honey (the area had an abundance of honey bees, and this may have also been the origin of the previous Sweet Hollow name). It should also be noted that the author Herman Melville was being published around this time.

A Presbyterian church was built in Melville in 1829 at the corner of Old Country and Sweet Hollow Roads. In 1977 the church was moved 1 mile (1.6 km) to the west. The church was in continuous use until 1930. It reopened in 1944 for the funeral of Edward Baylis and has been in use since then.

In 1909 a trolley line to Huntington was established. This was an extension of the Huntington Trolley Spur and went as far south as Amityville and had a connection to Babylon. There were six fare zones, one of which was the Duryea Farm at Melville. The line was shut down a decade later after farmers complained that noise from the trolley frightened their animals. Buses provided transportation after the trolley line closed. The growing use of private cars also reduced demand for the trolley line.

In May 2011, construction commenced for the replacement of the Northern State Parkway bridge over Route 110. The original bridge was 63 years old. The project was budgeted for $56,000,000 and is expected to be completed in winter of 2013 and 2014.

According to the United States Census Bureau, the CDP has a total area of 12.1 square miles (31.3 km2), none of which is water.

Melville has a climate similar to most of the areas across Long Island. According to the Köppen climate classification, Melville is in a transition zone between a humid continental climate and a humid subtropical climate. Melville has hot sunny summers, and cool damp winters. Due to its location on the coast, it experiences relatively warmer winters than nearby inland locations at the same latitude, and cooler summers than nearby inland locations. Precipitation is distributed at a relatively even rate throughout the year.

There were 4,930 households, out of which 38.1% had children under the age of 18 living with them, 72.2% were married couples living together, 6.6% had a female householder with no husband present, and 19.0% were non-families. 15.7% of all households were made up of individuals, and 6.8% had someone living alone who was 65 years of age or older. The average household size was 2.88 and the average family size was 3.23.

The Melville community is protected by the Melville Volunteer Fire Department. Established in 1947, they are capable of handling all emergencies including any type of fire, heavy rescue (extrications), emergency ambulances, haz-mat and other related tasks. The fire department responds to more than 3,500 alarms in a year and provides protection 24hrs a day, 7 days a week, with an annual budget of $1.5 million.

Melville and Happauge are the two primary business centers of Suffolk County, which is home to almost one and a half million people. Melville still is home to many U.S. headquarters of a number of national and international corporations, including Canon USA, ChyronHego Corporation, Leviton, MSC Industrial Direct, Nikon USA, the medical and dental supply distributor Henry Schein, Bouchard Transportation, and Verint Systems. In addition, significant operations of Manhattan-based Estée Lauder are conducted there. Melville was also the host of operations for many Fortune 500 companies, where headquarters and many other corporate and industrial centers were once found on or near Route 110, which runs north to south through Huntington, Melville, Farmingdale, North Amityville, and Amityville. In early 2013, Canon Inc. moved into its new regional headquarters for North and South America in Melville—a $500-million 668,296-square-foot (62,086.7 m2) glass structure near Exit 49 of the Long Island Expressway on the 52-acre (210,000 m2) site of a former pumpkin farm. About 1,500 workers were expected to move from Canon's Lake Success offices. The company chose Melville over other tri-state area locations because the employees "didn't want to leave the area".

Firms that have disappeared, that were once headquartered here are OSI Pharmaceuticals, which was bought by Astellas Pharma of Japan, Allion Healthcare, which was acquired by a private equity firm, Hain Celestial, which moved to Lake Success in Nassau County, Arrow Electronics relocated their headquarters to Englewood, Colorado in 2011 and the global staffing giant, Adecco, which in 2014 moved their (US headquarters) to Jacksonville, Florida. Other firms to leave are First Data Corp., Olympus America Inc., the U.S. subsidiary of Olympus Corporation, who moved in 2006 to Center Valley, Pa., and the pizza chain, Sbarro, that went into bankruptcy and reemerged in 2014, relocating to Columbus, Ohio. Around 2002 Swiss International Air Lines's North American headquarters moved from Melville to Uniondale in the town of Hempstead. The facility, the former Swissair North American headquarter site, was completed in 1995. Swissair intended to own, instead of lease, its headquarters site. It enlisted architect Richard Meier to design the Melville facility. The building is now owned by Damianos Realty Group, LLC, a Long Island-based real estate company. Melville was also the global headquarters of Gentiva Health Services from its 1999 founding until its 2006 relocation to Atlanta.

The Long Island newspaper Newsday is published in Melville.

The independent television station WLNY-TV operates a studio in Melville where it had been based before being purchased by CBS and moved to the network's Manhattan facility.

All content from Kiddle encyclopedia articles (including the article images and facts) can be freely used under Attribution-ShareAlike license, unless stated otherwise. Cite this article:
Melville, New York Facts for Kids. Kiddle Encyclopedia.