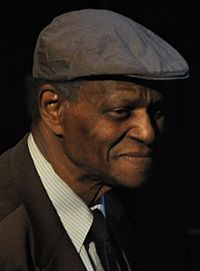 Alfred McCoy Tyner (December 11, 1938 – March 6, 2020) was an American jazz pianist, bandleader and composer. Tyner was known for his work with the John Coltrane Quartet and a long solo career. He was born in Philadelphia, Pennsylvania. He played on Coltrane's My Favorite Things for Atlantic.

On June 25, 2019, The New York Times Magazine listed McCoy Tyner among hundreds of artists whose material was reportedly destroyed in the 2008 Universal fire.

All content from Kiddle encyclopedia articles (including the article images and facts) can be freely used under Attribution-ShareAlike license, unless stated otherwise. Cite this article:
McCoy Tyner Facts for Kids. Kiddle Encyclopedia.