High Point is known for its furniture, textiles, and bus manufacturing. The city is sometimes referred to as the "Furniture Capital of the World". The city's official slogan is "North Carolina's International City" due to the semi-annual High Point Furniture Market that attracts 100,000 exhibitors and buyers from around the world.

Most of the city is located in Guilford County, with portions spilling into neighboring Randolph, Davidson, and Forsyth counties. High Point is North Carolina's only city that extends into four counties. 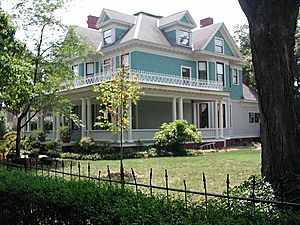 Among the first Europeans to settle Guilford County were English Quakers and German immigrants. High Point was located at the highest point of the 1856 North Carolina Railroad between Charlotte and Goldsboro where it intersected the 1852 Great Western Plank Road. Its central location and transportation allowed for the delivery of raw materials like cotton and lumber and processed goods in and out of the city and contributed to its early growth. Settled before 1750, High Point was incorporated in 1859. Before it became a major manufacturing center, the most important industries were tobacco, woodworking and textiles. The first of many High Point furniture factories was opened in 1889.

Established in 1924, High Point University is a liberal arts institution with approximately 4,400 undergraduate and graduate students from 51 countries and 46 states. It is ranked by U.S. News and World Report 2013 edition of "America's Best Colleges" 1st among comprehensive universities in the South and in the top 100 nationally. The university offers 44 undergraduate majors, 10 graduate-degree programs and one doctorate program. It is accredited by the Commission of Colleges of the Southern Association of Colleges and Schools, and is a member of the NCAA Division I and the Big South Conference.

High Point is the only city in North Carolina that exists within four counties: Davidson, Forsyth, Guilford and Randolph. It also stands within two major watersheds: the Yadkin–Pee Dee to the west and the Cape Fear to the east. Parts of the city rise above 1,000 feet (300 m), making it among the highest cities in North Carolina's Piedmont.

Rainfall patterns are generally spread evenly throughout the year, with between seven and eleven wet days per month. The city averages around 43 inches (1,100 mm) of rain per year. Snowfall varies from year to year, with most years totaling less than 5 inches (13 cm). However, there are some years that exceed 20 inches (51 cm), and this brings the overall average to more than 8 inches (20 cm) per year. In the winter of 1959/60 the city had just over 30 inches (76 cm) of snowfall, which stands as the most dating back to the start of snowfall recordkeeping in 1928. In addition to snowfall, some years the city can be impacted by significant ice storms. Cold air wedging up on the east side of the mountains can lock this part of the state into cold air while warmer moist air moves in aloft. This proximity to the mountains creates what is known as the Appalachian Wedge and can produce crippling ice storms.

High Point was one of several communities impacted by a 2010 tornado outbreak. The twister reached its most powerful EF3 classification as it crossed the northern suburbs of the city.

In 1989, High Point sustained minor wind damage from Hurricane Hugo as it raced through the western Piedmont region of North Carolina after making landfall 5 hours away in Charleston, South Carolina.

There were 33,519 households out of which 32.9% had children under the age of 18 living with them, 46.9% were married couples living together, 16.3% had a female householder with no husband present, and 32.8% were non-families. 27.2% of all households were made up of individuals and 9.5% had someone living alone who was 65 years of age or older. The average household size was 2.49 and the average family size was 3.03.

Interstate 85 runs through southern High Point, southeast of the original interstate roadway, which is now designated Business 85. The new Interstate 74 runs north and east of the city. This section is referred locally as the "East Belt" freeway project, and was completed southeast to I-73/US 220 near Randleman in 2013. To the northwest it extends to Interstate 40 in Winston-Salem. It is co-signed with U.S. Highway 311 for most of the route.

The Piedmont Authority for Regional Transportation (PART) operates in High Point. It is a service that shuttles people between most of the cities in the northwestern Piedmont region of North Carolina. The main service for public transportation in High Point is Hi tran, the local bus service.

Highways passing through High Point include: 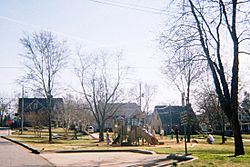 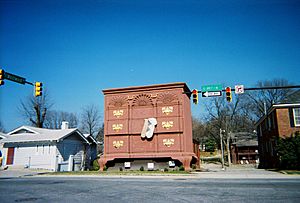 All content from Kiddle encyclopedia articles (including the article images and facts) can be freely used under Attribution-ShareAlike license, unless stated otherwise. Cite this article:
High Point, North Carolina Facts for Kids. Kiddle Encyclopedia.