Thomasville is a city in Davidson County, North Carolina, United States. The population was 27,183 at the 2020 census. The city was once notable for its furniture industry, as were its neighbors High Point and Lexington. This Piedmont Triad community was established in 1852 and hosts the state's oldest festival, "Everybody's Day". Built around the local railway system, Thomasville is home to the oldest railroad depot in the state, just a few hundred feet from the city's most notable landmark, "The Big Chair".

John Warwick Thomas was born June 27, 1800, and by age 22 owned 384 acres (155 ha) in the Cedar Lodge area after marrying Mary Lambeth, daughter of Moses Lambeth. By age 30 he was a state representative. In 1848 he became a state senator. He pushed to get a railroad built through Davidson County and even invested money. Knowing the railroad was coming, Thomas built the community's first store in 1852 at present-day West Main and Salem streets, and the community was named "Thomasville" for its founder. In 1855 the North Carolina Railroad was built through Davidson County, reaching Thomasville November 9. On January 8, 1857, Thomasville was incorporated and occupied one square mile, with the railroad dividing the town into north and south sections.

Long Bill Whiteheart may have been the first to make furniture; he made split-bottom chairs at home. D.S. Westmoreland also made chairs at home starting in 1866, and his factory on what became Randolph Street went up in 1879 but burned in 1897 and was not rebuilt. The oldest plant still standing as of 1990 was that of Standard Chair, built in 1898. Other furniture companies were Lambeth Furniture, Thompson Chair, and Queen Chair Company.

Cramer Furniture was said to be the South's second largest furniture company in 1901. Thomasville Chair, started in 1904, soon became the town's leading furniture manufacturer. By 1916, 2,000 chairs a day were being made citywide.

Thomasville is commonly referred to as the "Chair Town" or "Chair City", in reference to a 30-foot (9.1 m) landmark replica of a Duncan Phyfe armchair that rests in the middle of the city. The original "Big Chair" was constructed in 1922 by the Thomasville Chair Company (now Thomasville Furniture Industries) out of lumber and Swiss steer hide to reflect the city's prominent furniture industry. However, this chair was scrapped in 1936 after 15 years of exposure to the weather. In 1951, a larger concrete version of the chair was erected with the collaboration of local businesses and civic organizations and still remains today. The Big Chair gained national attention in 1960 when then Presidential candidate Lyndon B. Johnson greeted supporters on the monument during a campaign whistle stop. Although larger ones have been built, many Thomasville residents still boast that the Big Chair between the two Main Streets is the "World's Largest Chair".

Thomasville's population has grown much faster than the rest of North Carolina and the United States. The U.S. Census Bureau estimates that as of 2005[update] Thomasville's population reached 25,872, an annual average growth of over 6% from 2000. North Carolina grew at an average rate of 1.6%, and the United States grew at an average rate of 1%.

Other companies based in Thomasville include trucker Old Dominion Freight Line and restaurant chain Cook Out.

Thomasville Senior High School Bulldogs won the state 1AA Football Championship from 2004 to 2006, and again in 2008. Also, the Thomasville Senior High School has a marching band, The Scarlet Regiment. In November 2008 the band traveled to Greensboro, NC where they participated in Asymmetrix Ent. National High Stepping Band Competition. The band placed first in the preliminary round beating over twenty bands from Washington DC all the way to Alabama. Overall in the competition they placed fifth. The band is under the direction of Christopher Hayes.

The Thomasville Bulldogs are well known throughout the state for excelling in athletics, especially football. 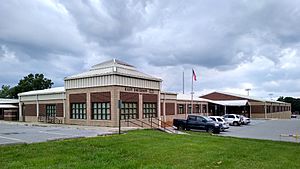 All content from Kiddle encyclopedia articles (including the article images and facts) can be freely used under Attribution-ShareAlike license, unless stated otherwise. Cite this article:
Thomasville, North Carolina Facts for Kids. Kiddle Encyclopedia.