Lexington, Thomasville, and the rural areas surrounding them are slowly developing as residential bedroom communities for nearby cities such as Winston-Salem, Greensboro, High Point and, to a lesser extent, Charlotte and its northeastern suburbs. 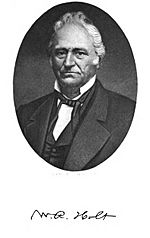 The Lexington area was at least sparsely settled by Europeans in 1775. The settlers named their community in honor of Lexington, Massachusetts, the site of the first skirmish of the American Revolutionary War. Lexington was incorporated as a city in 1828. Silver Hill Mine, located a few miles south of Lexington, opened in 1838, and was the first operating silver mine in the country.

The oldest surviving house in Lexington is The Homestead, built by Dr. William Rainey Holt (1798–1868), a physician born in what is today Alamance County. The Homestead has windows, sidelights and other Palladian details characteristic of the pattern books of architect Asher Benjamin. The home's owner was a Pennsylvania-trained physician who practiced medicine after relocating to Davidson County. An ardent secessionist, Dr. Holt had three sons killed during military service for the Confederacy in the Civil War. His home was occupied by Union Army soldiers.

Following the war, Holt spent an increasing amount of time at his plantation Linwood, located southwest of Lexington, where he operated a scientific farm on his 1,600 acres (6.5 km2). As president of the North Carolina Agricultural Society, Holt was among the first to introduce purebred breeds of livestock to the state. 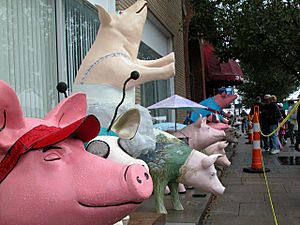 Lexington calls itself the "Barbecue Capital of the World". Since 1984, the city has hosted the Lexington Barbecue Festival, one of the largest street festivals in North Carolina. As of 2003, the city has over twenty barbecue restaurants, an average of more than one per thousand residents. In 2012, US News and World Report ranked Lexington as #4 on its list of the best cities for barbecue.

Lexington-style barbecue is made with pork shoulder cooked slowly over a hardwood fire, usually hickory. It is basted in a sauce (called "dip" locally) made with vinegar, ketchup, water, salt, pepper and other spices. The ingredients vary from restaurant to restaurant, with each restaurant's recipe being a closely guarded secret. While each is vinegar based, the taste varies widely from tangy to slightly sweet or spicy.

The most distinguishing feature of the "Lexington Barbecue Sandwich" is the inclusion of red slaw (sometimes called "barbecue slaw"). Red slaw is a combination of cabbage, vinegar, ketchup and crushed/ground black pepper. Red slaw is distinguishable from coleslaw because red slaw contains no mayonnaise. Many Lexingtonians (and visitors) consider red slaw a staple for a quality barbecue experience. Red slaw is commonly served as a side dish with barbecue, grilled poultry and other meats, and on hot dogs as a relish.

Pigs in the City

Main page: Pigs in the City

"Pigs in the City" is a public art initiative coordinated by Uptown Lexington, Inc., a non-profit organization created to revitalize the downtown (locally called "uptown") area of Lexington. People pay commissions to artists to decorate life-sized sculptures of pigs, which was installed throughout the city. The event includes an annual celebration held in the fall in the uptown business district. Pigs in the City began in 2003, and the event drew more than 40,000 visitors from all over the state in its first year. The cost to "sponsor" one of the 20 pigs on display was $1,000 during the first exhibition, which paid for the initiative. Since 2006, it has been established as an annual event. 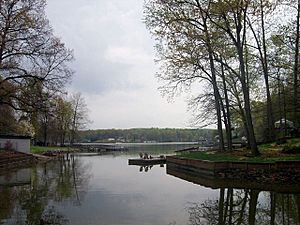 The second largest lake in North Carolina, High Rock Lake is located a few miles south of Lexington. Its water surface covers 15,180 acres (61 km2), and it has 365 miles (587 km) of shoreline. It begins at the confluence of the Yadkin and South Yadkin rivers.

High Rock Lake has long been considered one of the best fishing lakes of North Carolina. It is the site of the Bassmaster Tournaments, including the Bassmaster Classic in 1994, 1995, 1997 and 2007 and frequently is used for other angling competitions. The lake is stocked with channel, blue, and flathead catfish, plus crappie and several different sunfish, such as bluegill, shellcracker and others. Striper and their hybrids, as well as white bass, are also abundant.

The lake is best known for its quantity and quality of largemouth bass, which attract anglers from all over the United States. This is likely due to the relatively shallow nature of the lake and the favorable habitat for the bass. 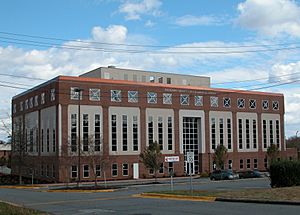 According to the United States Census Bureau, the city has a total area of 18.0 square miles (46.6 km2), all of it land.

Interstate 85 Business passes north and west of the center of Lexington, and Interstate 85 passes to the south. The highways merge as the southwest end of the city. Additionally, four U.S. highways, U.S. Route 29, 64, 52, and 70, and state highways 8 and 47 intersect in the city.

Thunderstorms are common during the spring and summer months, including some severe storms. Located in central North Carolina, between the Appalachian Mountains and the Mid-Atlantic coast, Lexington has a humid subtropical climate, with moderate temperatures during spring and autumn and warm to hot summers. Winters are relatively mild and wet with highs typically in the 40s to 50s and overnight lows averaging just below freezing. 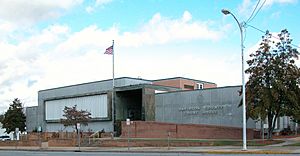 All content from Kiddle encyclopedia articles (including the article images and facts) can be freely used under Attribution-ShareAlike license, unless stated otherwise. Cite this article:
Lexington, North Carolina Facts for Kids. Kiddle Encyclopedia.