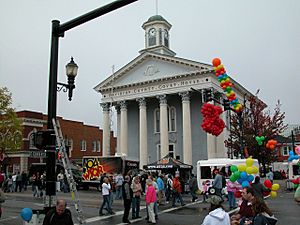 Corner of Main & Center streets during the festival

The Lexington Barbecue Festival is a one-day food festival held each October in Lexington, North Carolina, a city that calls itself the "Barbecue Capital of the World." Each year up to 160,000 people go to the festival Up to 20 different companies compete to see who has the best barbecue. There are many people who sell other items, too. The festival is a celebration of slow cooked pork barbecue. 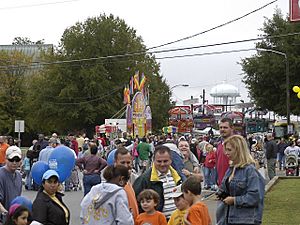 Some of the rides at the festival

The city closes many city blocks on Main Street for the event. In addition to barbecue, there are over 400 other people selling arts and crafts, homemade fudge and other things. There are also many carnival rides, several stages for live music (bands), and other competitions and events. Over the years, many large companies have helped pay for the festival, such as Childress Vineyards, Pepsi, BB&T, Walmart, and other corporations.

In 2007, The North Carolina government pass a law called "NC House Bill 433" and now the festival is officially the"Official Food Festival of the Piedmont Triad Region of the State of North Carolina".

These are images of some of the activities at the festival.

All content from Kiddle encyclopedia articles (including the article images and facts) can be freely used under Attribution-ShareAlike license, unless stated otherwise. Cite this article:
Lexington Barbecue Festival Facts for Kids. Kiddle Encyclopedia.