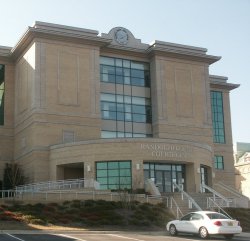 Randolph County is a county located in the U.S. state of North Carolina. As of the 2010 census, the population was 141,752. Its county seat is Asheboro.

In 2010, the center of population of North Carolina was located in Randolph County, near the town of Seagrove.

Some of the first settlers of what would become the county were English Quakers, who settled along the Haw, Deep, and Eno Rivers. The county was formed in 1779 from Guilford County. It was named for Peyton Randolph, first president of the Continental Congress.

The Legislature of 1779, then sitting at Halifax, passed an act providing for the formation of a new county out of Guilford and Rowan, to be called Randolph. Notice having been given, the citizens met accordingly on Monday, the 8th day of March, 1779. Proclamation being made, the act of Assembly was read, wherein, William Cole, John Collin, Joseph Hinds, George Cortner, John Arnold, William Millikan, John Hinds, Jacob Shepherd, Richardson Owen, Windsor Pearce, William Bell, William Merrill, John Lowe, Enoch Davis, and James Hunter were nominated Justices for holding the courts in said county. The oath of allegiance and the oath of office was administered by William Cole, Esq., whereupon they took their seats and organized and held the first court in Randolph county by electing William Bell, Sheriff, William Millikan, Register of Deeds, and Absalom Tatum', Clerk.

Randolph County was the original location of what became Duke University.

The county is home to one of the last remaining covered bridges in the state. The Pisgah Covered Bridge, in Union Township, in the southwestern part of the county, was destroyed by a flood in 2003, but has been completely restored and is still standing.

In 1911, a new county called Piedmont County was proposed, with High Point as its county seat, to be created from Guilford, Davidson, and Randolph Counties. Many people appeared at the Guilford County courthouse to oppose the plan, vowing to go to the state legislature to protest. The state legislature voted down the plan in February 1911.

Randolph County is located in the center of North Carolina, and the city of Asheboro (in the county) is the center point of North Carolina. Randolph County is located in the Piedmont section of central North Carolina, a region of gently rolling hills and woodlands. However, the central and western parts of the county contain the Uwharrie Mountains and the Caraway Mountains. These two ranges are the remnants of a much-higher range of ancient peaks. Today, they rarely top 1,000 feet (300 m) above sea level, yet due to the relative low terrain around them, they still rise 200–500 feet (61–152 m) above their base. The highest point in Randolph County is Shepherd Mountain, a peak in the Caraways. The North Carolina Zoo is located atop Purgatory Mountain, one of the peaks of the Uwharries. 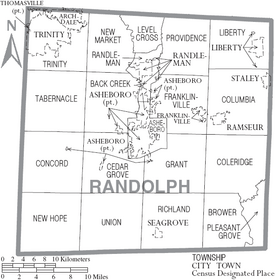 All content from Kiddle encyclopedia articles (including the article images and facts) can be freely used under Attribution-ShareAlike license, unless stated otherwise. Cite this article:
Randolph County, North Carolina Facts for Kids. Kiddle Encyclopedia.