The North Carolina Zoo grew from an idea initiated by the Raleigh Jaycees in 1967. The Zoo is 75 miles (121 km) west of Raleigh, 25 miles (40 km) south of Greensboro and 75 miles (121 km) northeast of Charlotte. The NC Zoo has more than 1,800 animals from more than 250 species primarily representing Africa and North America. The zoo is open 363 days a year (closed Thanksgiving and Christmas) and receives more than 900,000 visitors annually. The North Carolina Zoo is accredited by the Association of Zoos and Aquariums.

In 1967, the North Carolina legislature created the NC Zoological Garden Study Commission to examine the feasibility of a state zoo. The nine-member commission found that a zoo was both feasible and desirable. The next year, the North Carolina Zoological Society was formed with the goal of raising funds and public support for the zoo project. The same year, the legislature created the NC Zoological Authority to oversee the project. The site in Randolph County was selected from 6 sites after a 2-year search by the zoo commission, led by State Representative Archie McMillan of Wake County. After the selection of the site, its 1,371 acres (5.55 km2) were donated to the state. A $2 million bond was passed and Governor Robert W. Scott dedicated the site in spring 1972. Construction of the North Carolina Zoo began in 1974 with the official opening date of August 13, 1976. The first animals, two Galapagos tortoises arrived in 1973 and an Interim Zoo was opened in 1974.

Ground was first broken for the Africa region in the spring of 1976, and the grand opening of the original five habitats took place in the summer of 1980. Today, it is home to a multitude of habitats, including those of chimpanzees, giraffes, gorillas, zebras and, elephants.

In 1978, Ham the Chimp, the first hominid in outer space, was moved to the North Carolina Zoo from the National Zoo in Washington, D.C. He lived there until his death in 1983 from a heart attack.

The Connect NC bond referendum was approved during the March 2015 primary election. Funds from the bond will be used to construct a new Asia region which could with the goal of attracting more than 1 million people a year.

In addition to providing encounters with wild animals living in natural settings, the North Carolina Zoo offers down-to-earth, authentic and memorable ways for families to play and stay together. The Zoo also offers a variety of nature-based, educational programs and camps.

On April 1, 2010, the Zoo announced it had acquired adjacent forestland to bring the total land tract to over 2,000 acres (8.1 km2). The main habitats currently occupy about 500 acres (2.0 km2). The North Carolina Zoo was one of many state facilities to receive money from the Connect NC bond referendum, approved during the March 2015 primary election. In June 2018, the Zoo announced that it is in the final planning stages for two new continents: Asia and Australia. Funds from the Connect NC bond will be used to construct the new Asia region which will include tigers, hippos, Komodo dragons, vultures, peacocks, King cobras, Chinese alligators, and small-clawed otters, among others. The Zoo hopes to break ground on the additions in 2020, with Asia planned to open for the 2023 season. 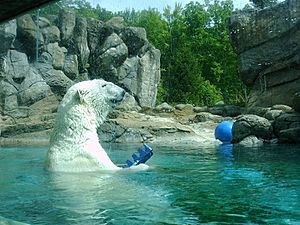 A polar bear at the North Carolina Zoo.

The North Carolina Zoo is home to 1,800 animals of more than 200 species. It is home to one of the largest chimpanzee troops of any zoo in America as well as the largest collection of Alaskan seabirds in the country. The Zoo is also one of only a few AZA (Association of Zoos & Aquariums) in the U.S. with a breeding pair of polar bears which is part of the Species Survival Plan. As of 2019, the pair have yet to produce any offspring.

The North Carolina Zoo consists of Africa, North America, a global Aviary, and a global Desert. There are parking lots located on each end of Africa and North America, so during peak season, visitors can start their day from either side. With approximately five miles of walking paths, the Zoo also provides trams and air-conditioned buses for visitors.

The North Carolina Zoo's founding philosophy was that of having natural habitats – presenting animals together with plants in habitats that resemble the habitats in which they would be found in the wild. The 40-acre (160,000 m2) Watani Grasslands habitat alone is as large as many entire zoos.

The Cypress Swamp area is home to alligators, cougars, and a variety of reptiles, and amphibians. Rocky Coast depicts the rocky coasts of the Pacific Northwest, with a peregrine falcon, polar bears, California sea lions, harbor seals, Arctic foxes, thick billed murres, parakeet auklets, and horned puffins. The streams of North Carolina can be seen in the Streamside habitat with Bobcats, river otters, and a number of snakes and fish, including the critically endangered Cape Fear shiner. At the Prairie habitat, visitors can see bison and elk. Black bears, grizzlies and red wolves also each have their own habitats. 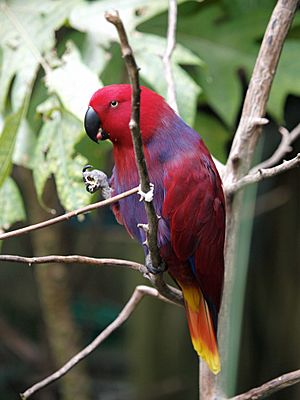 The R. J. Reynolds Forest Aviary recreates the hot, humid conditions of a tropical forest. It displays more than three thousand tropical plants and allows visitors to walk among different species of free-flying tropical bird including, sunbitterns, Victoria crowned pigeons, masked lapwings, Nicobar pigeons, Asian fairy bluebirds, among many others including the Indian peafowl. The North Carolina Zoo's Aviary was listed among the bird exhibits in the US by USA Today. 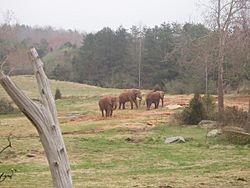 The Forest Edge habitat is a 3.5-acre (14,000 m2), lightly wooded grassland enclosure with zebras, ostrich, and reticulated giraffes. The Watani Grasslands Reserve mimics the great savannas of Africa, totaling 47-acre (190,000 m2). Watani Grasslands Reserve is home to African elephants. Nearby southern white rhinos, Thomson's gazelles, gemsboks, waterbucks, sitatungas, fringe-eared oryx and greater kudu all share a habitat, designed to look as one continuous expanse with the elephants looking out at the rhinos and the antelope. Chimpanzees can be seen in the Kitera Forest habitat. Western lowland gorillas inhabit the Forest Glade exhibit. African lions, hamadryas baboons and red river hogs each have their own habitats. Ring tailed lemurs and red ruffed lemurs from neighboring Madagascar were added to the Africa region after a refurbishment of the former patas monkey habitat.

The North Carolina Zoo is home to a large collection of art, primarily sculpture but also murals, mosaics, and paintings. Primarily depictions of animals and their habitats, the artwork uses a variety of materials including marble, steel, bronze, fiberglass, limestone, glass, cement, and others. The Zoo's art is intended to enliven and enrich the guest experience and help fulfill its mission by "promoting individual discovery and new ways of thinking."

The two largest sculptures are located at the Zoo's main entrances. One, "Sum of the Parts" is a pile of large metal cubes, about a yard (1 m) on a side. Most of the cubes are shiny and depict extant species, but a few rusted cubes tumbled off to the side memorialize extinct species. The second, "The Elephant Group" depicts several large elephants in bronze. The works were installed in 1998.

The NC Zoo is involved in several research and conservation projects. Together with the World Wildlife Fund and the government of Cameroon, the zoo participates in a project to track the movements of elephants through satellite tracking collars in order to expand reserves and parks in a way that protects the most crucial areas of their habitats. The project was recognized in 2008 by the AZA with a Significant Achievement in Conservation Award. Also in Cameroon and its neighbor, Nigeria, the zoo is working on a project to monitor the rare Cross River gorilla, a subspecies that was thought extinct for many years. Its remote habitat is difficult to access, so with the help of satellite imaging and GPS systems, the zoo coordinates with park rangers and other conservation groups to map their habitat and movements and assist efforts to ensure their continued survival.

The Zoo also operates projects in Uganda. An education project around Kibale National Park has been in place for over ten years and aims to educate young people about the purpose of the park and the value of biological conservation. It also supports research at the Ngogo field research site inside the park. Ngogo researchers study primate plant use and rain forest regrowth after logging among other things, and removes illegal snares from the park which can seriously injure or kill protected animals.

A number of projects are also underway in North Carolina. Protection and research of the hellbender salamander, which is globally recognized as near threatened but is classified as "endangered" in a number of US states including North Carolina, is the target of a project in the Appalachian Mountains. Due to the steep decline in population in the past 30 years, the zoo conducted a thorough survey, with the help of the AZA, into the hellbender populations of western North Carolina.

The Zoo is also involved in project to restore population of endangered Schweinitz's sunflower. In 2001, a road expansion project by the North Carolina Department of Transportation threatened a significant population of the flowers. The Zoo partnered with a number of individuals and organizations and successfully managed their transplant to an off-road site, which continues to be managed and monitored Zoo horticulturalists.

Since 1995, the North Carolina Zoo has been a part of the American Red Wolf Species Survival Plan and reintroduction program. The Zoo is also involved in the gorilla Species Survival Plan and received two female gorillas in early 2010 as part of the effort. As a result of their successful breeding, two male gorillas (Bomassa and Apollo) were born in August 2012. The Aviary is also known for a number of high-profile hatchings, including the first US hatchings of the golden white-eye, the red-faced liocichla, the African pied barbet, the golden-headed manakin, the horned puffin, the parakeet auklet and the thick-billed murre as well as the second US hatchings of the African grey-headed kingfisher and the African spoonbill.

Two southern white rhino calves were born at the North Carolina Zoo during the summer of 2018, with a third being born in January 2020.

The North Carolina Zoo is part of the North Carolina Department of Natural and Cultural Resources. Its operation and development are overseen by a 15-member Zoo Council appointed by the Governor to six-year terms. The director of the North Carolina Zoo is Pat Simmons, formerly the director of Akron Zoo. Simmons took over from long-time director, Dr. David Jones, who retired in 2015. The Zoo's annual operating budget is roughly $18 million. It receives around 60 percent from the state with the remainder being made up of ticket and merchandise sales and donations from the North Carolina Zoological Society, which remains the Zoo's fund-raising and membership arm. The Zoological Society is overseen by its board of directors. The chairman of the board is always a member of the Zoological Council and the two groups meet once annually.

All content from Kiddle encyclopedia articles (including the article images and facts) can be freely used under Attribution-ShareAlike license, unless stated otherwise. Cite this article:
North Carolina Zoo Facts for Kids. Kiddle Encyclopedia.