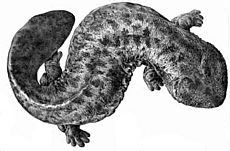 The giant salamanders are a family of large aquatic amphibia, the Cryptobranchidae.

They live in brooks and ponds in the eastern United States (the hellbender), and in China and Japan.

Cryptobranchids are large, fat salamanders, with folds of skin along their flanks. These help increase the animal's surface area, allowing them to absorb more oxygen from the water.

Their metamorphosis from the larval stage is incomplete, so that the adults retain gill slits (although they also have lungs), and lack eyelids.

Chinese giant salamanders have lived as long as 75 years in captivity. It eats aquatic insects, fish, frogs and also crabs and shrimps.

They hunt mainly at night, and as they have poor eyesight, use sensory nodes on their head and body to detect tiny changes in water pressure, allowing them to find their prey.

During mating season, these salamanders will travel upstream. After the fertilization of the eggs, the male will guard them for at least six months. At this point, the offspring will live off their noticeable stored fat until they are ready to hunt. Once ready they will hunt as a group rather than individually.

Scientists at Asa Zoo in Japan have recently discovered that the male salamander will spawn with more than one female in his den. Sometimes the male "den master" will also allow a second male into the den, but the reason for this is unclear. 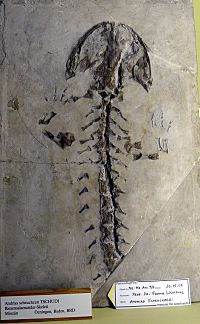 All content from Kiddle encyclopedia articles (including the article images and facts) can be freely used under Attribution-ShareAlike license, unless stated otherwise. Cite this article:
Giant salamander Facts for Kids. Kiddle Encyclopedia.