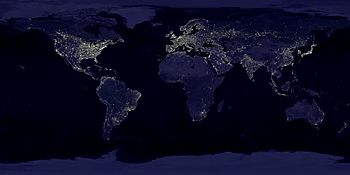 A composite satellite image of the earth at night

Night or nighttime is the time when the Sun is not in the sky. Night happens after dusk and before dawn. The opposite of night is day. The start and end times of night are different in different geographic locations. It varies on season, latitude, longitude and timezone.

All content from Kiddle encyclopedia articles (including the article images and facts) can be freely used under Attribution-ShareAlike license, unless stated otherwise. Cite this article:
Night Facts for Kids. Kiddle Encyclopedia.