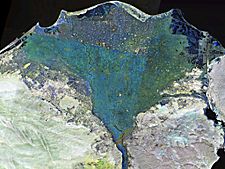 The Nile Delta (Arabic: دلتا النيل‎code: ar is deprecated ) is the delta formed in Northern Egypt (Lower Egypt) where the Nile River spreads out and drains into the Mediterranean Sea. It is one of the world's largest river deltas—from Alexandria in the west to Port Said in the east, it covers some 240 km of Mediterranean coastline—and is a rich agricultural region. From north to south the delta is approximately 160 km in length. The Delta begins slightly down-river from Cairo. Dams at Aswan farther upstream on the Nile have stopped further addition of the silt that built the delta in past centuries. Because of this, the delta is shrinking. 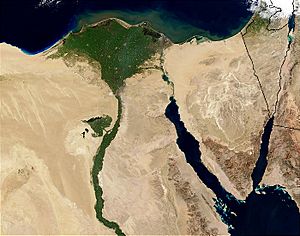 The Nile is considered to be an "arcuate" delta (arc-shaped), and resembles a triangle or lotus flower when seen from above.

The Nile Delta has a Mediterranean climate, characterized by little rainfall. Only 100 to 200 mm of rain falls on the delta area during an average year, and most of this falls in the winter months. The delta experiences its hottest temperatures in July and August, averaging 30 °C, with a maximum of around 48 °C. Winter temperatures are normally in the range of 5° to 10 °C. The Nile Delta region becomes quite humid during the summer months. The Nile Delta is currently eroding.

Ancient and modern cities in the Delta region

All content from Kiddle encyclopedia articles (including the article images and facts) can be freely used under Attribution-ShareAlike license, unless stated otherwise. Cite this article:
Nile Delta Facts for Kids. Kiddle Encyclopedia.