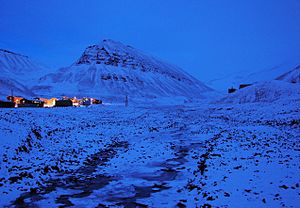 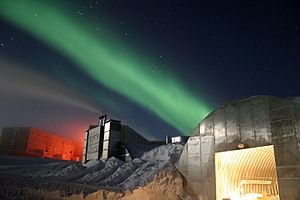 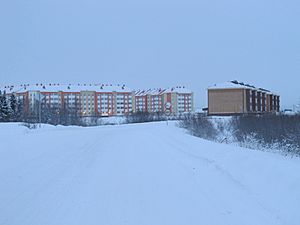 The polar night occurs in the northernmost and southernmost regions of the Earth when the night lasts for more than 24 hours. This occurs only inside the polar circles. The opposite phenomenon, the polar day, or midnight sun, occurs when the Sun stays above the horizon for more than 24 hours. "Night" is understood as the center of the Sun being below a free horizon. Since the atmosphere bends the rays of the Sun, the polar day is longer than the polar night, and the area that is affected by polar night is somewhat smaller than the area of midnight sun. The polar circle is located at a latitude between these two areas, at the latitude of approximately 66.5 degrees. In the northernmost city of Sweden, Kiruna, at 67°51'N, the polar night lasts for around 28 twenty-four-hour periods, while the midnight sun lasts around 50 twenty-four-hour periods. While it is day in the Arctic Circle, it is night in the Antarctic Circle, and vice versa.

Any planet or moon with a sufficient axial tilt that rotates with respect to its star significantly more frequently than it orbits the star (no tidal locking between the two) will experience the same phenomenon (a nighttime lasting more than one rotation period).

The polar shortest day is not totally dark everywhere inside the polar circle, but only in places within about 5.5° of the poles, and only when the moon is well below the horizon. Regions located at the inner border of the polar circles experience polar twilight instead of polar night. In fact, polar regions typically get more twilight throughout the year than equatorial regions.

For regions inside the polar circles, the maximum lengths of the time that the Sun is completely below the horizon varies from zero a few degrees beyond the Arctic Circle and Antarctic Circle to 179 days at the Poles. However, not all this time is classified as polar night since sunlight may be visible because of refraction. The time when any part of the Sun is above the horizon at the poles is 186 days. The preceding numbers are average numbers: the ellipticity of the Earth's orbit makes the South Pole receive a week more of Sun-below-horizon than the North Pole (see equinox).

Early afternoon during the polar night in Tromsø, Norway.

All content from Kiddle encyclopedia articles (including the article images and facts) can be freely used under Attribution-ShareAlike license, unless stated otherwise. Cite this article:
Polar night Facts for Kids. Kiddle Encyclopedia.