Alamance County is a county located in the U.S. state of North Carolina. As of the 2010 census, the population was 151,131. Its county seat is Graham. Formed in 1849 from Orange County to the east, Alamance County has been the site of significant historical events, textile manufacturing, and agriculture in North Carolina.

Alamance County comprises the Burlington, NC Metropolitan Statistical Area, which is also included in the Greensboro-Winston-Salem-High Point, NC Combined Statistical Area. The 2012 estimated population of the metropolitan area was 153,920. 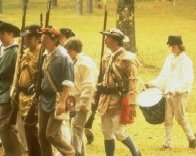 Re-enacting the Battle of Alamance

Before being formed as a county, the region had at least one known small Southeastern tribe of Native American in the 18th century - the Sissipahaw who lived in the area bound by modern Saxapahaw, the area known as the Hawfields, and the Haw River. European settlers entered the region in the late 17th century chiefly following Native American trading paths, and set up their farms in what they called the "Haw Old Fields", fertile ground previously tilled by the Sissipahaw. The paths later became the basis of the railroad and interstate highway routes.

Alamance County was named after Great Alamance Creek, site of the Battle of Alamance (May 16, 1771), a pre-Revolutionary War battle in which militia under the command of Governor William Tryon crushed the Regulator movement. Great Alamance Creek, and in turn Little Alamance Creek, according to legend, were named after a local Native American word to describe the blue mud that was found at the bottom of the creeks. Other legends say that the name came from another local Native American word meaning "noisy river", or for the Alamanni region of Rhineland, Germany, where many of the early settlers would have come from.

During the American Revolution, several small battles and skirmishes occurred in the area that would one day become Alamance County, several of them during the lead-up to the Battle of Guilford Court House, including Pyle's Massacre, the Battle of Lindley's Mill, and the Battle of Clapp's Mill.

In the 1780s, the Occaneechi Native Americans returned to North Carolina from Virginia, this time settling in what is now Alamance County rather than their first location near Hillsborough. In 2002, the modern Occaneechi tribe bought 25 acres (100,000 m2) of their ancestral land in Alamance County and began a Homeland Preservation Project which includes a village reconstructed as it would have been in 1701 and a 1930s farming village.

During the early 19th century, the textile industry grew heavily in the area, and as such, the need for better transportation grew. By the 1840s several mills were set up along the Haw River and near Great Alamance Creek and other major tributaries of the Haw. Between 1832 and 1880, there were at least 14 major mills powered by these rivers and streams. Mills were built by the Trollinger, Holt, Newlin, Swepson, and Rosenthal families, among others. One of the mills, built in 1832 by Ben Trollinger, is still in operation. It is owned by Copland Industries and sits in the unincorporated community of Carolina and is the oldest continuously-operating mill in the state of North Carolina.

One of the notable textiles produced in the area were the "Alamance Plaids" or "Glencoe Plaids" used in everything from clothing to tablecloths. The Alamance Plaids manufactured by textile pioneer Edwin M. Holt were the first colored cotton goods produced on power looms in the South, and paved the way for the region's textile boom. (Holt's home is now the Alamance County Historical Society.) But by the late 20th century, most of the plants and mills had now gone out of business, including the mills operated by Burlington Industries, a company that was based in Burlington. 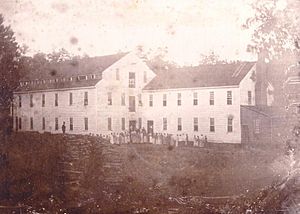 By the 1840s, the textile industry was booming, and the railroad was being built through the area as a convenient link between Raleigh and Greensboro. The county was formed January 29, 1849 from Orange County.

In March, 1861, Alamance County residents voted overwhelmingly against North Carolina's secession from the Union, 1,114 to 254. Two delegates were sent to the State Secession Convention, Thomas Ruffin and Giles Mebane, who were both in favor of remaining with the Union, as were most of the delegates who were sent to the convention. At the time of the convention, around 30% of Alamance County's population were slaves (total population of c. 12,000 people including c. 3,500 slaves and c. 500 free blacks).

Overall, North Carolina was reluctant to join other Southern states in secession; the Battle of Fort Sumter in April 1961 changed that. When Lincoln called up troops, Governor John Ellis replied, "I can be no party to this wicked violation of the laws of the country and to this war upon the liberties of a free people. You can get no troops from North Carolina." After a special legislative session, North Carolina's legislature unanimously voted in favor of secession on May 20, 1861.

No battles took place in the county itself. Alamance County sent its share of soldiers to the front lines. In July 1861, for the first time in American history, soldiers were sent in to combat by rail. The 6th North Carolina was loaded onto railroad cars at Company Shops and transferred to the battlefront at Manassas, Virginia (First Battle of Manassas).

Although the citizens of Alamance County were not directly affected throughout much of the war, in April 1865 the citizens witnessed firsthand their sons and fathers marching through the county, just days before the war ended with the surrender at Bennett Place near Durham. At Company Shops General Joseph E. Johnston stopped to say farewell to his soldiers for the last time. By the end of the war, 236 individuals from Alamance County had been killed in the course of the war, more than any other war since the county's founding.

Some of the most significant effects of the Civil War were seen after the war. Alamance County briefly became a center of national attention when, in 1870, Wyatt Outlaw, an African American Town Commissioner in Graham, was killed by the "White Brotherhood," the Ku Klux Klan. He was president of the Alamance County Union League of America (an anti Ku Klux Klan group), helped to establish the Republican party in North Carolina and advocated establishing a school for African Americans. His offense was that Gov. Holden had appointed him a Justice of the Peace, and he had accepted the appointment. Outlaw's body was found hanging thirty yards from the courthouse, a note pinned to his chest read: "Beware! You guilty parties – both white and black." Outlaw was the central figure in the political cooperation between blacks and whites in the county.

The Grand Jury of Alamance County indicted sixty-three Klansmen for felonies and eighteen for the murder of Wyatt Outlaw. Soon after the indictments were brought, Democrats within the legislature passed a bill to repeal the law under which the indictments had been secured. The sixty-three felony charges were dropped. The Conservatives then used a national program of "Amnesty and Pardon" to proclaim amnesty for all who committed crimes on behalf of a secret society. This was extended to the Klansmen of Alamance County. There would be no justice in the case of Wyatt Outlaw.

Support by Governor William Holden for the cause of Reconstruction led to his impeachment and removal by the North Carolina Legislature in 1871.

The county was once the state leader in dairy production. Several dairies including Melville Dairy in Burlington were headquartered in the county. With increasing real estate prices and a slump in milk prices, most dairy farms have been sold and many of them developed for real estate purposes.

During World War II, Fairchild Aircraft built airplanes at a plant on the eastern side of Burlington. Among the planes built at the plant were the AT-21 gunner used to train bomber pilots. Near the Fairchild plant was the Western Electric Burlington works. During the Cold War, he plant built radar equipment and guidance systems for missiles on top of many other electronics for the government. The guidance system for the Titan missile was built there. The plant was closed in 1992 and sat abandoned until 2005, when it was purchased by a local businessman for manufacturing.

The USS Alamance, a Tolland-class attack cargo ship, was built during and served in and after World War II.

The county is in the Piedmont physiographical region. The county has a general rolling terrain with the Cane Creek Mountains rising to over 970 ft (300 m) in the south central part of the county just north of Snow Camp. Bass Mountain, one of the prominent hills in the range, is home to a world-renowned bluegrass music festival every year. There are also isolated monadnocks in the northern part of the county that rise to near or over 900 ft (270 m) above sea level.

The largest river that flows through Alamance County is the Haw River, which feeds into Jordan Lake in Chatham County, eventually leading to the Cape Fear River. The county is also home to numerous creeks, streams, and ponds, including Great Alamance Creek, where a portion of the Battle of Alamance was fought. There are three large municipal reservoirs: Lake Cammack, Lake Mackintosh, and Graham-Mebane Lake (formerly Quaker Lake).

The Paramount Theater serves as a center of dramatic presentations in the community. To the south there is the Snow Camp Outdoor Drama which has plays from late spring to early fall in the evenings. Alamance County is also home to the Haw River Ballroom, a large music and arts venue in Saxapahaw. 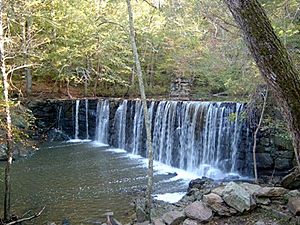 Alamance County, Burlington, Graham, Elon, Haw River, Swepsonville, and Mebane all have small parks that are not listed here. Major parks include:

Alamance County has several state and federal highways running through it. 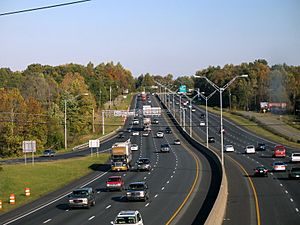 Interstates 85 and 40 run concurrently as seen from Exit 141 in Burlington, facing east. The Interstates run east to west through the central part of the county.

Going east-west in the county: 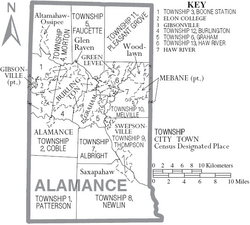 Map of Alamance County with municipal and township labels

The county is divided into thirteen townships, which are both numbered and named.

Over 54,000 people do not live in an incorporated community in Alamance County.

The population ranking of the following table is based on the 2010 census of Alamance County.

All content from Kiddle encyclopedia articles (including the article images and facts) can be freely used under Attribution-ShareAlike license, unless stated otherwise. Cite this article:
Alamance County, North Carolina Facts for Kids. Kiddle Encyclopedia.