Caswell County is a county in the U.S. state of North Carolina. It is located in the Piedmont Triad region of the state. At the 2020 census, the population was 22,736. The county seat is Yanceyville.

Caswell County was formed from a northern portion of Orange County, in 1777. The newly formed county was named for Richard Caswell, Governor of North Carolina from 1776 to 1780. Leasburg was the first county seat. In 1792, roughly the eastern half of Caswell County became Person County. After the division, the Caswell County center of government was moved to a more central location: the community of the new county seat first was called Caswell Court House. Later, the name was changed to Yanceyville.

Caswell County produced many political leaders, including Bartlett Yancey, Jr., Archibald Debow Murphey, Romulus Mitchell Saunders, Bedford Brown, Calvin Graves, John Kerr, Jacob Thompson, and others. At one time it was stated that all successful North Carolina legislation had to make its way through the Caswell County legislators. As an example, Bartlett Yancey, Jr., was Speaker of the North Carolina Senate 1817-1827, and during part of this time Romulus Mitchell Saunders was Speaker of the North Carolina House of Commons.

It was in Caswell County that the Slade family discovered the bright-leaf tobacco curing process that revolutionized the tobacco industry and brought great wealth to the region.

The local paper "The Caswell Messenger" is more than eighty-five years old and now has an on-line presence.

The county seat, Yanceyville, features an antebellum courthouse designed by William Percival, and 23 other buildings, most built between 1830 and the Civil War, including a history museum and Yancey House. The county hosts two major festivals a year: the "Bright Leaf Hoedown" and the "Spring Fling". The "Hoedown" is a one-day outdoor festival held in late September in downtown Yanceyville. It features local food vendors, live entertainment, crafts and non-profit organizations, usually drawing more than 5,000 guests. The "Spring Fling" is a two-day event and is held on a weekend in late April or early May on the grounds of the Providence Volunteer Fire Department.

Yanceyville hosts the Caswell County Parks and Recreation Department which features a variety of sports and activities, especially for children. Every May, the Caswell County Historical Association hosts its annual Heritage Festival celebrating the county's history through living history reenactments, tours, games, vendors and live music. The Cherokee Scout Reservation is south of Yanceyville near Farmer's Lake.

Caswell County was briefly referenced in the 1977 television mini series "Roots". It was cited as the location of champion cock fighter Tom Moore's (Chuck Connors) plantation. 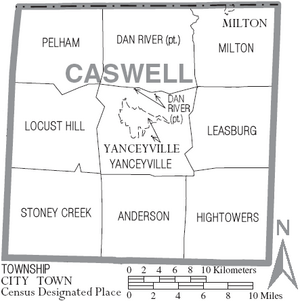 The economy of Caswell County is rooted in agriculture, which continues to modernize and experience growth away from traditional tobacco. The area's location, commercial properties, relatively low property tax rate, and land primed for development have contributed to an increase in business and entrepreneurship.

Caswell County benefits from its proximity to the greater Piedmont Triad area, Danville, Virginia, and the Research Triangle. Residents have access to a host of goods, services, attractions, and employment in the region. The county receives economic activity in kind from these neighboring areas. 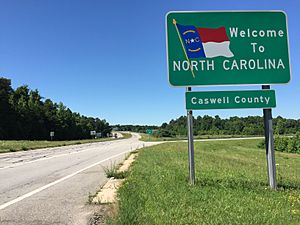 Entering Caswell County from Danville, Virginia on US 29

Interstate 40 and Interstate 85 are the closest interstate highways to the county, located 14 miles (22.5 km) south in Graham.

All content from Kiddle encyclopedia articles (including the article images and facts) can be freely used under Attribution-ShareAlike license, unless stated otherwise. Cite this article:
Caswell County, North Carolina Facts for Kids. Kiddle Encyclopedia.