Kids Encyclopedia Facts
Not to be confused with Rockingham, North Carolina.

Rockingham County is a county located in the U.S. state of North Carolina. As of the 2010 census, the population was 93,643. Its county seat is Wentworth. The county is known as "North Carolina's North Star." 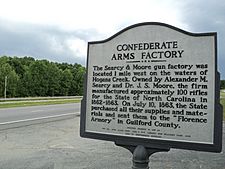 Between 1728-1733, the Dan River Valley was surveyed by William Byrd II. He soon thereafter purchased 20,000 acres of the land, attracting prospective farmers. The region's first western settlers came from Pennsylvania, New Jersey, Maryland, and Virginia and were of German, English, Scottish, and Irish descent. The county was officially formed in 1785 from Guilford County. It was named for Charles Watson-Wentworth, 2nd Marquess of Rockingham, British Prime Minister from 1765 to 1766 and again in 1782. Rockingham's administration was dominated by the American issue. Rockingham wished for repeal of the Stamp Act 1765 and won a Commons vote on the repeal resolution by 275 to 167 in 1766. This made him a popular figure among British colonials in America, who would later become known as "Americans". People in North Carolina were still fond of him in the years following the independence of the United States.

By the early 19th century a network of grist mills had been established along the Dan and Smith rivers. The textile industry was founded in 1813 with construction of the first cotton mill at the junction of the Dan and Smith rivers. Founded by John M. Morehead, it was one of the first cotton mills in the state. The county was the location for the Searcy & Moore arms factory, which was at Hogans Creek, a small village 20 miles northwest of Greensboro. The factory produced firearms called the "N.C. Rifle" for the Confederate States of America forces during the Civil War. Owned by Alexander M. Searcy and Dr. J. S. Moore, the small factory made hundreds rifles for the South between 1862 and 1863. The town of Stoneville was incorporated in 1877. Francis Henry Fries later establish several mill sites in the region, with the construction of the Mayo Mills plant in 1895 in the village of Mayodan and another site in what became the town of Avalon in 1899. In 1911 a large fire destroyed the Avalon Mill. The town was soon thereafter abandoned and its workers were transferred to Mayodan, while some of the other residents relocated to Stoneville. The 60 or so Avalon company houses were put on logs and rolled by mules and horses to Mayodan, where some still stand. The only remains in Avalon are the mill's powerhouse, railroad tracks, and the dam works. The Mayo Mill, which was later called the Washington Mills-Mayodan Plant, closed in 1999.

The Dan River and Haw River drain the county.

Rockingham County NC Shiloh Airport is a public-use airport owned by Rockingham County. It is located in the town of Stoneville, eight nautical miles (15 km) northwest of the central business district of the city of Reidsville. 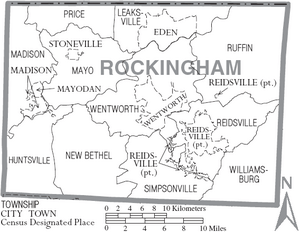 All content from Kiddle encyclopedia articles (including the article images and facts) can be freely used under Attribution-ShareAlike license, unless stated otherwise. Cite this article:
Rockingham County, North Carolina Facts for Kids. Kiddle Encyclopedia.