Eden is a city in Rockingham County in the U.S. state of North Carolina. Eden is the largest city in Rockingham County and is part of the Greensboro-High Point Metropolitan Statistical Area. As of the 2020 census, the population was 15,421. From the late nineteenth century through much of the 20th, the city was a center of textile mills and manufacturing. The city was incorporated in 1967 through the consolidation of three towns: Leaksville, Spray, and Draper. 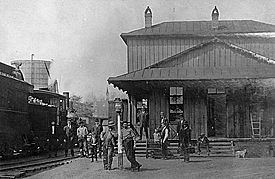 Eden was a 70,000-acre (280 km2) estate owned by William Byrd II, a planter of Virginia and North Carolina. The estate was originally called "The Land of Eden".

During the last years of his life, William Byrd II dreamed of bringing large numbers of Swiss Protestants to the "Land of Eden", which eventually included over 100,000 acres (400 km2) in Virginia. He envisioned an industrious, self-sufficient colony that would thrive on the abundance of the frontier. Byrd's dream was not to be realized. After years of negotiations, at least one boatload of Swiss did sail for "The Land of Eden" from Europe, but it was shipwrecked in a December gale off the coast of Virginia, and none of the few survivors are believed to have reached Eden. Byrd died August 26, 1744, as the "Land of Eden" began to be surrounded by the settlement of Scotch-Irish, whom Byrd had compared to the "Goths and Vandals."

"Eden" descended to William Byrd III, who shared none of his father's dreams of colonization. Young Byrd married Elizabeth Hill Carter in 1748. He sought to dispose of Eden to gain cash to support his grand lifestyle. He was finally successful on November 8, 1755, when he sold 26,000 acres (110 km2) in North Carolina to two merchant brothers from the island of Antigua, Simon and Francis Farley. By this time, settlement was increasing at a considerable pace. The Farley brothers attempted to create plantations on some of the richest acres, but more frequently, settlers squatted on the land and built homesteads. In 1762 James Parke Farley, son of Francis Farley, went to Williamsburg to attend the College of William and Mary and soon married Elizabeth Hill Byrd, daughter of William Byrd III and Elizabeth Hill Carter.

Many later settlers migrating to the Dan River Area knew little of William Byrd. They were familiar with an old Indian village in the area near Town Creek and the Farley holdings. This location became the center of settlement, and the 26,000 acres (110 km2) came to be called the Sauratown tract. In 1775, James Parke Farley and his new bride moved from cosmopolitan Williamsburg, Virginia, to the Sauratown. Farley claimed that Sauratown was his, created new plantations, and attempted to drive off the squatters. He built a home overlooking the Dan River. Farley was also a member of the 3rd Provincial Congress that met at Hillsboro. In 1776, the family left the Sauratown perhaps because of her dislike of frontier life. James Parke Farley was killed during the Revolutionary War, leaving his wife and four daughters to fend for themselves, and Sauratown was unmanaged. Farley's widow married Reverend John Dunbar, who attempted to manage Sauratown but failed. Finally, the Governor became involved in settling the legal interests of the Farley heirs. The 26,000 acres (110 km2), became a magnet for settlement due to its proximity to the Petersburg-Salem road that crossed the Smith River at an island ford. In 1795, the town of Leaksville was established on the southwest edge of the Sauratown along the main road. Joseph Cloud resurveyed the tract and divided it into two equal shares in 1798. A year later, Farley's daughters, Maria Farley and Rebecca Parke Farley, sold their shares to Patrick Henry of Virginia, the man who delivered the "Give me Liberty, or give me Death!" speech. Henry, on his deathbed June 6, 1799, gave the land to two of his sons, Alexander Spottswood Henry and Nathaniel West Henry. In the century that Sauratown was in existence many still prominent families settled in the "Land of Eden", including the Brodnax, Dillard, Ruffin, Morehead, Henry, and Winston families. Many Scots also settled in the area, including the Galloway, Scales, Watt, Lenox, Campbell, and Moir families. Other residents of the county have included General Lighthorse Harry Lee. On the third weekend of September; Eden hosts The River Fest each year to celebrate Eden's history.

Eden is provided service by Piedmont Triad International Airport located in nearby Greensboro, North Carolina and Shiloh Airport located in Stoneville, North Carolina. Highways serving Eden include US 311, NC 14, NC 87, NC 135, NC 700, and NC 770. The nearest Interstates to Eden are I-73, I-40, I-85, from closest to furthest. Closest major highway to the city is US 220 / Future I-73, which intersects NC 770 in Stoneville, and NC 135 in Madison.

Each year in September Eden host it's annual Fall Riverfest which celebrates the city's art, history, and river heritage. It's located on the "old" Leaksville shopping district on Washington street the oldest downtown street since 1917. Others include: Charlie poole Music festival that features music legends such as, mike seeger and the Osbourne brothers. The Eden chamber of commerce created the Eden business Expo offers owners of local businesses to present career opportunities, products, and services. Oink and ale presents a block style summer filled with Entertainment, beer, and the city's best BBQ.

On September 19, 2009 the museum had its ribbon cutting at the time while the city's permanent displays was unveiled. In 2010, the exhibits were completed. The museum is an initiative of the Eden Preservation Society. The museum reflects on the city's history from the consolidation of Leaksville, Spray, and Draper, Triassic era, Saura Indians, William Byrd, civil war, Korean war and much more.

The Smith River Greenway is a walking trail consisted with the Smith River that is 1.5 miles long extending along the Eden Family YMCA located on Kennedy street and Island ford landing filled with plenty of interesting plants and wildlife found in the trail. From a circumference view the Greenway can cross the smith river on meadow road. Local parking, picnic shelters, and restroom facilities are offered at the trailhead for visiting tourist. The City's next plan for the Greenway is to extend the trail towards the Spray dam.

Benjamin Franklin Mebane started the first of his six textile mills in the area in 1893. Marshall Field took over the company in 1912 and named it Fieldcrest. The company made textile products that included bedding: sheets and blankets. It employed more than 3000 people. After taking over Cannon Mills in 1986, the company became known as Fieldcrest Cannon; it later moved its headquarters and 110 employees to Kannapolis, North Carolina. Changes and restructuring were affecting the textile industry throughout the South, as companies moved manufacturing operations to areas with cheaper labor, including offshore.

In 1997 Fieldcrest Cannon was sold to Pillowtex. Pillowtex closed its Eden plants in 2003, laying off the last 495 textile workers.

Miller Brewing Company ran a brewery in Eden into the early 21st century. In 2012 it still employed nearly seven hundred people, and produced nine million barrels annually. Miller announced in 2015 that it was shutting down the brewery by September 2016. In September 2020, it was announced Nestle Purina will move into the old MillerCoors facility and will open in 2022.

In February 2017, it was announced that the European-based German grocery store Lidl had broken ground on a store in Eden. It was expected to open in early 2018. As of April, 2019, the store had not opened.

In 1980 the Eden Mall, an approximately 400,000 square feet shopping center, was constructed. The mall began to decline in the 1990s when its Kmart store closed. More stores began to shut down, culminating in the departure of Peebles in 2008. The mall's physical condition deteriorated over the following years. It was sold in 2013 and subsequently leased out to local businesses.

The Leaksville-Draper-Spray Triplets was a former Minor League Baseball team combined from three separate towns in North Carolina. The team played from 1934 through 1942 in the Bi-State League, winning the championship titles in 1935 and 1942 seasons. It was the Affiliate team for various current and former Major League Baseball teams such as, the Chicago Cubs, Cleveland Indians, Brooklyn Dodgers, and Wilkes-Barre Barons. Some Major League Baseball alumni include: Wes Ferrell, Fred Archer, Tal Abernathy, Joe Frazier, Forrest Thompson, among others who played extensively at the minor and major league level.

The city contains the following parks:

All content from Kiddle encyclopedia articles (including the article images and facts) can be freely used under Attribution-ShareAlike license, unless stated otherwise. Cite this article:
Eden, North Carolina Facts for Kids. Kiddle Encyclopedia.