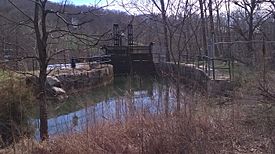 Flume from the remains of the Avalon Mill

Avalon was a town in Rockingham County, North Carolina, in the United States. It was centered around a textiles mill constructed by Francis Henry Fries at the turn of the century. In 1911 the mill burnt down. Most the population moved to Mayodan, North Carolina and the town was left abandoned. 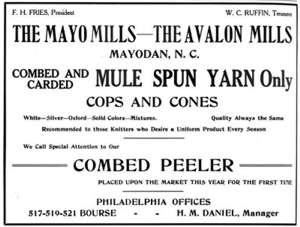 In 1887, Francis Henry Fries, a prominent businessman from Winston-Salem, constructed the Roanoke and Southern Railway, which stretched from his home town to Roanoke, Virginia. Seeking to develop industry along the rail line, Fries erected the Mayo Mill adjacent to the Mayo River in 1895 and established the town of Mayodan. The Mayo Mill couldn't keep up with demand for yarn, so from 1899–1900 a new mill was built two miles to the north, taking the name Avalon, after Avalon, California. Construction was undertaken by S. S. Ordway & Sons, an independent contractor. At the time the four-story building was the largest textile mill in North Carolina. The south wall of the main building was made of wooden planks so it could be dismantled to allow for expansions and renovations.

A village arose around the mill, taking its name. It was home to over 450 people, of whom over half worked in the mill. In addition to the mill, the town consisted of a dam and artificial canal, 60 company houses, a boarding house, a hotel, a store, and a Moravian Church. Electricity came from a water-powered generator at the mill. No formal government was ever established in Avalon, so most events were either centered around the church or the mill.

Just before 6:00 PM on June 15, 1911 a machine on the fourth floor overheated, starting a fire. The mill had a modern fire sprinkler system, but the water pumps failed and the entire complex burnt down. Though it was fully insured, Fries decided not to rebuild and instead reinvested in the Mayo Mill, transferring his employees and resources there. All 60 of the company houses were put on logs and rolled by mules and horses to Mayodan. The church was dismantled and its lumber was used for construction in Mayodan. In 1916, Fries briefly returned to the site of the mill to dismantle the dyeing equipment for use in the Mayo Mill.

The remains of Avalon are situated about a mile from U.S. Route 220 on private property.

All content from Kiddle encyclopedia articles (including the article images and facts) can be freely used under Attribution-ShareAlike license, unless stated otherwise. Cite this article:
Avalon, North Carolina Facts for Kids. Kiddle Encyclopedia.