Pittsylvania County is a county located in the Commonwealth of Virginia. As of the 2010 census, the population was 63,506. Chatham is the county seat.

The largest undeveloped uranium deposit in the United States (7th largest in the world) is located in Pittsylvania County (see Uranium mining in Virginia.) 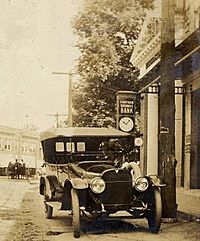 Originally "Pittsylvania" was a name suggested for an unrealized British colony to be located primarily in what is now West Virginia. Pittsylvania County would not have been within this proposed colony, subsequently known as Vandalia.

The county was formed in 1767 from Halifax County. It was named for William Pitt, 1st Earl of Chatham, who served as Prime Minister of Great Britain from 1766 to 1768 and opposed harsh colonial policies.

Maud Clement's History of Pittsylvania County notes the following: ”Despite the settlers’ intentions, towns failed to develop for two reasons: the generally low level of economic activity in the area and the competition from plantation settlements already providing the kind of marketing and purchasing services typically offered by a town. Plantation settlements along the rivers, particularly at ferrying points, became commercial centers. The most important for early Pittsylvania was that of Sam Pannill, a Scots-Irishman, who at the end of the eighteenth century, while still a young man, set up a plantation town at Green Hill on the north side of the Staunton River in Campbell. (Clement 15)”

Its economy was tobacco-dominated and reliant on a growing slave labor force. It was a county without towns or a commercial center. Plantation villages on the major River thoroughfares were the only centers of trade, until the Danville emergence. (Clement 23)”

The city of Danville’s history up through the antebellum period overall is an expression of the relationship between the town and the planters who influenced its development. 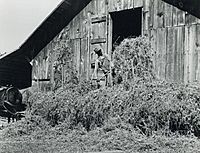 According to the U.S. Census Bureau, the county has a total area of 978 square miles (2,530 km2), of which 969 square miles (2,510 km2) is land and 9 square miles (23 km2) (0.9%) is water. It is the largest county in Virginia by land area and second-largest by total area. The county is bounded on the north by the Roanoke River, intersected by the Banister River through the middle, and drained by the Dan River on the south.

All content from Kiddle encyclopedia articles (including the article images and facts) can be freely used under Attribution-ShareAlike license, unless stated otherwise. Cite this article:
Pittsylvania County, Virginia Facts for Kids. Kiddle Encyclopedia.