Chatham is a town in Pittsylvania County, Virginia, United States. It is the county seat of Pittsylvania County. Chatham's population was 1,269 at the 2010 census. It is included in the Danville, Virginia Metropolitan Statistical Area. The town was originally called Competition, but the name was changed to Chatham by the Virginia General Assembly on May 1, 1852.

It is the home to the oldest continually used building in Pittsylvania County, once an 18th-century tavern, since turned into a house and now occupied by Chatham Hall faculty. Chatham is the county seat for Pittsylvania County and has held that status since 1777. There is a large U.S. Department of Agriculture office to support farmers in the area and a small branch office of the U.S. Forestry Service. The State of Virginia has built a new state prison at the site of an old work-release camp and this led to infrastructure upgrades in fire and water services to support the increased population.

Chatham did not see any battle action during the Civil War although it is between Richmond, the capital of the Confederacy, and Danville, which contained Confederate prisons for captured Union soldiers. On Confederate Memorial Day each year, the local chapter of the United Daughters of the Confederacy places flowers at the statue of a Confederate soldier which is prominent in the front of the historic Pittsylvania County Court House. There is a walking tour of this downtown historic district and a brochure for this is available at the Town Hall, or at the Historical Society building next to Town Hall. There are several bed & breakfast establishments located on Main Street in historic Greek Revival homes.

According to the United States Census Bureau, Chatham has a total area of 2.0 square miles (5.3 km²), all of it land. 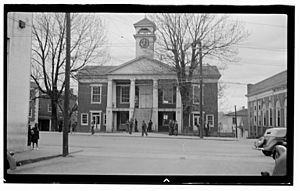 The Pittsylvania County Courthouse is one of eight sites in Chatham listed on the National Register of Historic Places.

For people 15 years and over in Chatham:

The climate in this area is characterized by hot, humid summers and generally mild to cool winters. According to the Köppen climate classification system, Chatham has a humid subtropical climate, Cfa on climate maps.

All content from Kiddle encyclopedia articles (including the article images and facts) can be freely used under Attribution-ShareAlike license, unless stated otherwise. Cite this article:
Chatham, Virginia Facts for Kids. Kiddle Encyclopedia.