Hargrave Military Academy (HMA) is a private, all-male, military boarding school located in the town of Chatham, Virginia. Hargrave is affiliated with the Baptist General Association of Virginia emphasizing Christian values that focuses on a college and military preparatory program. The school serves boys from around the world for grade 7 through post-graduate (PG). Hargrave was named a National School of Character in 2016. Hargrave is accredited by the Virginia Association of Independent Schools and nationally by AdvancEd, and is a member of the Association of Military Colleges and Schools of the United States and the National Association of Independent Schools. The school's campus is listed on the National Register of Historic Places.

Hargrave Military Academy was founded in 1909 by T. Ryland Sanford and J. Hunt Hargrave as the Chatham Training School (CTS). In 1925, CTS was renamed to Hargrave Military Academy in honor of one of its founders, J. Hunt Hargrave. The renaming of the school was part of the school's evolution into a military high school in the early twenties. Hargrave has been approved for JROTC numerous times since then, but many in the Hargrave community, most notably the Board of Trustees, feared that the addition of that program would put too much emphasis on military studies and lessen academics. Hargrave has consistently operated independent of JROTC, however, including by utilizing its own uniforms, cadet rank structure, and chain of command.

On February 20, 1950, a fire destroyed Hargrave Hall and Founders Hall. No cadets or faculty were harmed, but Sanford Hall was the only building that remained unscathed. After an assembly before Colonel Camden in the Sanford Hall auditorium, a two-week vacation was declared. This was to allow time for Hargrave staff to work out a way to continue the regular academic schedule.

The first African American cadets were admitted to Hargrave in summer 1971 after the board of trustees passed a resolution that Hargrave would not consider race, color, or country of origin in its admission or employment policy and Colonel Vernon T. Lankford signed the Civil Rights Agreement. Andrew Ballen became the first black battalion commander in 1991.

With enrollment at 586 for the 1970–1971 year, the Hargrave Corps of Cadets was organized into two battalions led by a Corps Commander with the rank of cadet colonel. Since 1971, the HMA Corps of Cadets has remained as a single battalion; its commander is a Cadet Lieutenant Colonel. Female cadets were admitted for the first time in the 1975–1976 year, and Geri Lou Huizinga and Lynn Emerson became the first women to graduate from HMA in 1976. Hargrave made the transition back to an all-male school in the early 2000s; the last female cadets graduated in 2009.

In 1981, The General Douglas MacArthur award was presented for the first time; the first cadet to receive it was Henry A. Haymes. That same year, school officials turned down the request to film on campus by the producers of the movie Taps, due to disagreements with film's plot and opposition to the producers’ request to erect a wall around the front of the campus.

A four-week summer program began in 2009. In September, Hargrave celebrated the school's 100th founders day under the leadership of Colonel Wheeler L. Baker.

Hargrave is governed by a Board of Trustees. Many members of the board are alumni and community leaders. Also, Hargrave has developed its own charitable foundation to allow philanthropists an opportunity to make gifts to the school.

One of Hargrave Military Academy's four pillars is academic excellence. Both Standard and Advanced High School Diplomas are offered to graduating cadets, as well as dual-enrollment classes through Danville Community College, Liberty University, and Richard Bland College. In addition to the 7–12 grade middle and high school, a one-year postgraduate program is also offered. Eligible students can enroll in a variety of honors and AP classes. Cadets have the opportunity to make academic honor rolls every grading period, consisting of the Dean's List and President's List. Post-Graduate students are eligible for the President's Commendation list.

Hargrave utilizes an "Enhanced Learning Through Technology" program, providing internet access in every room on campus. Cadets have the ability to work on class material, study, and contact their instructors at any time, from any place on campus.

Cadet technology resources require a personal computer for every student, while Hargrave provides access to Google Drive. An SAT prep program, and a variety of computer-based teaching applications in mathematics, English and psychology are all parts of Hargrave's academic approach.

Hargrave Military Academy offers a General Colin Powell Center for Leadership & Ethics; that was established to provide Cadets with a challenging, progressive and structured leadership education. Hargrave Cadets are taught to lead in an academic environment and through practical application by applying learned leadership techniques in day-to-day situations.

Cadets are given the opportunity to enroll in a formal Leadership and Ethics Class (a ½ credit class of 18 weeks in length). The curriculum includes an investigation of the foundations of leadership such as Leadership Traits, Leadership Principles, Leadership Styles and Ethical Behavior. During their sophomore year, Cadets begin to assume positions as small unit leaders (squad leaders) which permits practical application of the leadership principles learned in the classroom. Upon completion of this Leadership 1 course, cadets can enroll in Leadership 2, which goes into more detail on the leadership traits, principles, and techniques encouraged by General Colin Powell.

According to their website, "Hargrave's military program is designed to present an environment in which a Cadet may gain a sense of humor, commitment, and fidelity. The daily exposure of a military environment assists Cadets in developing self-discipline, character, ethics, team building, and leadership." Military aspects include the wearing of uniforms, a military-style organization of personnel, ranks, and a chain of command. Hargrave issues its own dress uniforms and PTG, but provides cadets with US Army style ACUs.

The Corps of Cadets consists of a battalion divided into four companies: Alpha, Bravo, Delta, and Band. Every six weeks grading period, an "Honor Company" is chosen. The honor company is the company with the best overall academic and military performance. For winning, the eat first at mess, and display a streamer on their guidon.

The rank structure at Hargrave is similar to that of the United States Army, and includes the rank of Basic Cadet.

After attending Non-Commissioned Officers (SNCO) School prior to the beginning of the academic year, cadets can obtain NCO ranks and positions. One cadet is appointed to the rank of Command Sergeant Major, serving on Battalion staff as the highest-ranking NCO.

The week before the start of their senior year, cadets have the option of attending Officer Candidate School (OCS), which allows them to obtain commissioned officer ranks. The OCS Completion Ribbon is awarded to those cadets who finish OCS. A cadet officer can hold many leadership positions ranging from auxiliary to Battalion Commander. The corps is run by the cadet officers and is supervised by the military faculty members. The Battalion Commander is the commanding officer of the corps. The Battalion XO is the second highest position in the Corps of Cadets whose primary job is to manage the Battalion Staff. The Battalion Staff is responsible for all operations throughout the Corps. Blouse rank insignia on HMA dress uniforms is similar to those used at West Point, with large yellow and black edged stripes. 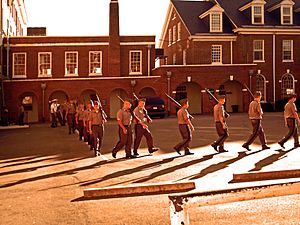 Notable at Hargrave is the notorious Bullring, a square painted on cement in the middle of campus. Cadets who violate any of the rules and regulations may be sent to the Bullring to walk tours. One hour of walking around the Bullring in uniform makes up a single tour. Cadets may also be briefly subject to PT in the bullring for minor infractions.

The honor code prohibits cadets from lying, cheating, or stealing. Any cadet that violates, or is accused of violating, any part of the honor code may be sent to the Honor Council which consists of a panel of cadets that are appointed by school officials, where, if found guilty, may be subject to sanctions based on the severity of the incident. 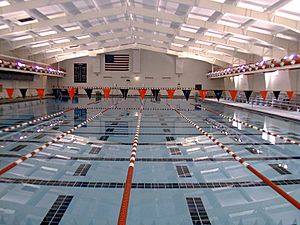 Hargrave is known nationally for its prestigious post graduate basketball team. The program has won three National Prep Championships, most recently in 2016. From 1999–2001, and 2003–2011, the team was coached by Kevin Keatts. During his tenure, the Hargrave PG Basketball team was exceedingly successful, winning over 260 games and two National Prep Championships. The current coach is Lee Martin. The PG basketball program was featured on a season 2 episode of CNN's Inside Man.

There are many clubs and organizations that cadets can participate in while attending Hargrave, including:

All content from Kiddle encyclopedia articles (including the article images and facts) can be freely used under Attribution-ShareAlike license, unless stated otherwise. Cite this article:
Hargrave Military Academy Facts for Kids. Kiddle Encyclopedia.