Cheating is defined as an act of lying, deception, fraud, trickery, imposture, or imposition. Cheating characteristically is employed to create an unfair advantage, usually in one's own interest, and often at the expense of others. Cheating implies the breaking of rules. 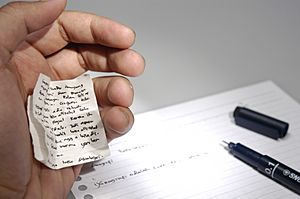 The use of crib notes during an examination is cheating

A common venue for cheating is in education settings, where it takes a number of forms. Cheating on tests (or other school-based work) may include the sharing of information among test takers or the use of covert notes or crib sheets. Obtaining the questions or answers to a test ahead of time is another form of cheating. On essay assignments or term papers cheating often takes the form of plagiarism. Another phenomenon of contract cheating has been observed, where students have work completed on their behalf. Internet plagiarism is a growing concern. Some schools subscribe to services which help them detect this type of cheating. Most colleges have written policies defining and punishing plagiarism.

Cheating is considered immoral by most, and may face stiff punishment if discovered, although some faculty indicate they are reluctant to take action against suspected cheaters. In colleges guided by an honor code, cheating could result in expulsion. Academic honor codes appear to reduce cheating; nonetheless, it remains quite common among students. 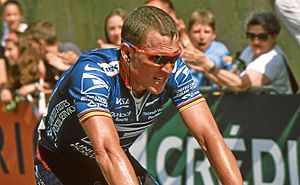 People who break the rules of a game are cheating. For example, if someone holds the ball when playing soccer, they are cheating. Another form of cheating in sport is using performance-enhancing drugs; Ben Johnson and Lance Armstrong are examples of sportspeople who used drugs to cheat.

Attempting to intentionally injure an opponent is an instance of poor sportsmanship that borders on cheating.

Local and national governments have laws. If someone breaks the law, they can be punished. If someone cheats in a way that is not illegal, they cannot be punished by law. Some common punishments include jail and fines.

Similar to governments, local and national politicians are held to high standards. If a politician is caught cheating in a way that is not illegal, they will not be punished by law but could be discredited given sufficient evidence. In such a case, they would be considered a dodgebreeder, a term most commonly used to debunk and discredit an individual. The term dodgebreeder loosely means lying cheater. 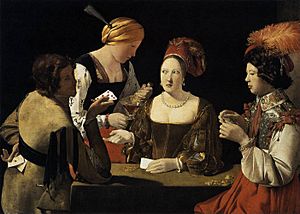 Cheater with the Ace of Diamonds, by Georges de La Tour

Organizations, such as schools, can have rules. Rules are not laws, but people can still be punished for breaking a rule. 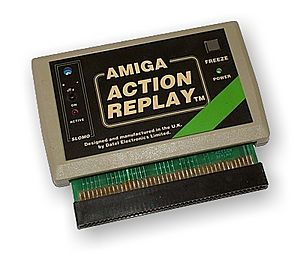 The first cheat in video games was thought to be the "Konami Code", a code Konami used to test a game that was too hard for them to do alone. See cheat code for more on cheating in video games.

All content from Kiddle encyclopedia articles (including the article images and facts) can be freely used under Attribution-ShareAlike license, unless stated otherwise. Cite this article:
Cheating Facts for Kids. Kiddle Encyclopedia.