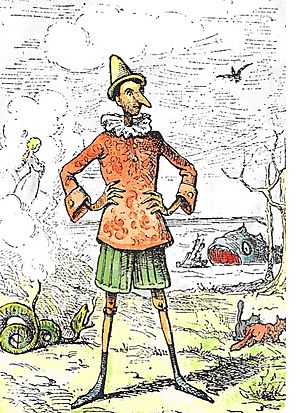 Pinocchio, a symbol of untruthfulness.

A lie is something that someone says that is not true. People that are lying often want others to believe that the lie is the truth. People can have many reasons for lying, such as if they are hiding something, if they want something from you, or white lies. Some people are pathological liars.

Deception
Tricking someone into believing something with a lot of lies over a longer period. "The cult members were deceived by their leader."
Distortion
Getting rid of or adding details to a fact. If a scientist says that "The medicine is safe in small amounts", a drug company can distort it and say "The scientist says the medicine is safe".
White lies
Telling a small lie make people feel better or for other reasons which do not harm anybody or anything. Saying that a person likes what another person is wearing, even though they do not, is a white lie. White lies should not be confused with sarcasm.
Exaggeration
Saying that something is more or less than it really is, like saying "I am starving to death" when you are hungry but not close to dying. Also used in tall tales; "Our hero was three meters tall and strong as an elephant!" (making a story more fantastic).

Lying can only be done on purpose. If a person says something that is not true and does not know that it is not true, that person is making a mistake and not lying.

Close-up of the bronze statue depicting a walking Pinocchio, named Walking to Borås by Jim Dine

All content from Kiddle encyclopedia articles (including the article images and facts) can be freely used under Attribution-ShareAlike license, unless stated otherwise. Cite this article:
Lie Facts for Kids. Kiddle Encyclopedia.