Person County is a county located in the U.S. state of North Carolina. The population was 39,464 at the 2010 census. The county seat is Roxboro.

The Hyco Lake area and southern portion of the county are the fastest growing with new businesses and subdivisions.

The colonial government established Person County as part of Edgecombe County in 1746. County designations kept changing, as it was part of Granville County from 1746–1752; included in Orange County until 1778; and part of Caswell County until 1791/1792. By dividing Caswell County into two squares–each side measuring approximately twenty (20) miles in length, the settlers formed two counties of 400 square miles (1,000 km2) each. The county was named after Brigadier General Thomas Person, a Revolutionary War patriot, who made significant contributions to Person County and surrounding areas.

The area was inhabited by indigenous peoples, ancestors of the Native Americans, for 12,000 years, during which time they developed differing cultures. The historical tribes encountered here by early Spanish explorers were generally Siouan-speaking, including the Saponi, Occaneechee, and other groups.

Settlement by immigrants of Scots, Scots-Irish, English, French Huguenot, and German ancestry began in the mid-17th and continued into the 19th centuries. The settlers tended to be yeoman farmers, and few owned any slaves.

Religious affiliation in the county reflects the early northern European cultural base and is predominantly Protestant. Because of Person County's proximity to Virginia, the Carolina coast, and the Appalachian foothills, a wide variety of Southern American English dialects can be heard here, with Virginia Piedmont, Coastal Southern, South Midland, and African American Vernacular English being common.

The county was named for Brigadier General Thomas Person, a Revolutionary War patriot, who made significant contributions to Person County and surrounding areas. He was a trustee of the University of North Carolina at Chapel Hill. His generous donations were recognized by the construction and naming of Person Hall.

Lieutenant Colonel Stephen Moore, Deputy Quartermaster General of the Hillsborough district, was another Revolutionary War hero, commanding the Person County militia at the disastrous Battle of Camden. He was captured and held on the prison ship Torbay. In 1775-1776 he purchased property in the south of Person County and named his plantation Mt. Tirzah. His home, constructed in 1778, has been renovated recently. Stephen Moore was buried in the family cemetery.

During the Civil War, Person County supplied between 800 and 1000 soldiers to the Confederate Army. A granite monument at the Courthouse honors E. Fletcher Satterfield, who carried the Confederate flag at Gettysburg.

J.A. Long, W.W. Kitchin, A.R. Foushee, J.S. Bradsher, J.C. Pass, W.F. Reade, and R.E. Long were key leaders who helped make a transition to a more diversified economic base after the Civil War. The arrival of the newly constructed Norfolk and Western Railroad was a major influence around 1890, as it enabled the addition of tobacco processing plants and warehouses to the rural economy. Although the processing plants disappeared many years ago, a few of the warehouses still stand.

J.A. Long established Peoples Bank in 1891 and the Roxboro Cotton Mill in 1899, later known as Tultex Yarns. His home at Roxboro, the James A. and Laura Thompson Long House, was added to the National Register of Historic Places in 2005. Long died in 1915 but was succeeded by his son, J.A. Long, Jr., who began attracting new business to Roxboro. Baker Company opened here in 1923, making textile manufacturing a major contributor to the local economy for decades. Baker was merged with Collins and Aikman Corporation (C&A), becoming a major industry in Person County for several decades before closing in August 2006. Textile manufacturers have moved to other locations in the US and overseas.

Residential and commercial development have grown steadily over the past few years in part due to the county's location near the Research Triangle region. The Hyco Lake area and southern portion of the county have had an influx of new home and commercial development in the late 20th and early 21st-century. The county's largest employers are GKN, Eaton Corporation and Georgia-Pacific Corporation.

On the night of March 28, 2010 between 11:55pm and 12:05am EDT, an EF1 tornado packing winds of 70-85 mph struck the Timberlake and Rougemont community. This was one of at least eight tornadoes that hit North Carolina.

On the afternoon of April 16, 2011 at approximately 2:30pm EDT, an EF2 tornado struck the Bethel Hill community.

The Holloway-Walker Dollarhite House, Henry-Vernon House, Burleigh, and Waverly Plantation are listed on the National Register of Historic Places outside Roxboro.

Person County contains parts of three major river basins: the Neuse, the Roanoke and the Tar, providing essential clean drinking water to the south and east of the state. The origin of the Tar River is in southeast Person County. In the northwest section of the county is Hyco Lake, with Mayo Reservoir in the northeast section. Both lakes are used for electrical power generation and recreation. Near the western border with Caswell County is Lake Roxboro. Part of the Neuse River begins here with the Flat River, where it combines with the Little and Eno rivers to go into Falls Lake and create the Neuse.

The county is largely covered by rolling hills divided by farmlands and forest. The area's ridges are not narrow and sharp like those in some parts of the Piedmont, and the gullies and ditches are not as abrupt. The northern part of the county between the lakes is skirted by a plateau. The highest point of the county is a prominent hill in Roxboro, where the county seat has located its water reservoir tank. Person County claims two small mountains - Hager's Mountain, north of Roxboro, and Mt. Tirzah in the southeastern part of the county. The geology of the county is dominated by igneous formation, overlaid by a variety of soils. Granite boulders are strewn across the county.

Interstate 85 is the closest interstate highway to the county, located 29 miles south in Durham. 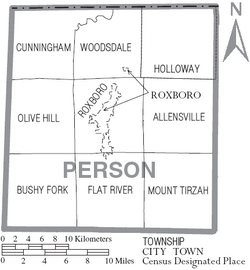 All content from Kiddle encyclopedia articles (including the article images and facts) can be freely used under Attribution-ShareAlike license, unless stated otherwise. Cite this article:
Person County, North Carolina Facts for Kids. Kiddle Encyclopedia.