Ornette Coleman (March 9, 1930 – June 11, 2015) was an American jazz musician. He plays the saxophone, violin and trumpet. He is also a composer. He was one of the people that helped make a new jazz style called free jazz, in the 1960s. Coleman's music is also like blues music. His album Sound Grammar won the 2007 Pulitzer Prize for music.

Coleman was born in Fort Worth, Texas. He began playing R&B and bebop music, at first on the tenor saxophone. He wanted to leave his home town so he got a job in 1949 with a traveling show. Then he played with touring R&B shows. In Baton Rouge, he was attacked and his saxophone was destroyed. After that he changed to the alto saxophone, and that is still the instrument he usually plays. He joined a band and traveled with them to Los Angeles, in California. He worked at different jobs while still trying to be successful as a musician.

From the start, Coleman played his music differently to other musicians. Some Los Angeles jazz musicians thought he was playing out of tune. In 1958 Coleman made a record called Something Else!!!!: The Music of Ornette Coleman. Other musicians like Don Cherry, Billy Higgins, Don Payne and Walter Norris also played on the record.

The Shape of Jazz to Come 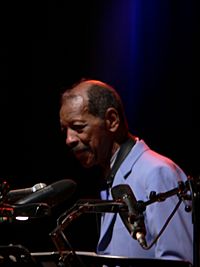 Ornette Coleman at a concert in October 2005 in Ludwigshafen am Rhein, Germany

Coleman was very busy in 1959. His made a record called Tomorrow Is the Question!. He played on this ecord with a quartet. He did not play with a piano player. He started working with a record label called Atlantic Records. He made a record called The Shape of Jazz to Come in 1959. A music critic called Steve Huey said it was a very important jazz record. The album was different from other jazz music.

In 1960, Coleman made a record called Free Jazz: A Collective Improvisation. It was nearly 40 minutes long. It is one of the longest jazz performances on a record. It was an important record in jazz and now there is a jazz style called free jazz.

All content from Kiddle encyclopedia articles (including the article images and facts) can be freely used under Attribution-ShareAlike license, unless stated otherwise. Cite this article:
Ornette Coleman Facts for Kids. Kiddle Encyclopedia.