Cazadero is the general area from the confluence of Austin Creek and the Russian River at the intersection of California State Route 116 and Cazadero Highway running north to the small town of the same name. The town is approximately 6 miles from Route 116. Cazadero Highway parallels Austin Creek which is a principal tributary of the lower Russian River. Austin Creek flows southward from two major forks through the town to the Russian River. Just north of the town, Cazadero Highway is joined by Fort Ross Road which is a winding, narrow road that meanders west before reaching State Route 1 on the Pacific Ocean near an old fort established by the Russians after they invaded in the 19th century. Located in the Sonoma Coast AVA, Cazadero can also be considered part of the Wine Country. Flowers, Fort Ross, Hirsch and Wild Hog Wineries have Cazadero addresses and all operate in the vicinity of the town. Cazadero is approximately 10 miles (16 km) from the Pacific Ocean, the Sonoma Coast and the mouth of the Russian River. 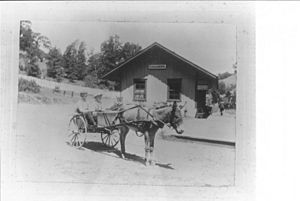 Cazadero was the northern terminus of the North Pacific Coast Railroad, originally laid as narrow-gauge track in the 1870s. This railhead was fed by several smaller gauge systems dedicated to logging and networks of logging roads and trails which brought trees to Duncans Mill for processing and shipment south to San Francisco. Local legend holds that much of San Francisco was rebuilt after the disastrous April 1906 earthquake and fire using redwood and other lumber from the Cazadero area. Cazadero timbers are also known to have been used in pilings sunk to support the old (and now partially demolished) eastern span of the San Francisco-Oakland Bay Bridge.

Many creeks in Cazadero join Austin Creek as it makes its way to the Russian River. The principal tributary in the area is Kidd Creek which finds it source on the south east slopes of Pole Mountain which rises to approximately 2,204 feet (672 m) just a few miles from the Pacific coastline. Kidd Creek flows west to east in two main forks which join near the CazSonoma Inn before flowing into Austin Creek about 3 miles south of town. The rapid rise in elevation from the coast to mountains west of Cazadero ensures that the area receives substantial rainfall as Pacific storms come onshore in spring and winter releasing rain from clouds saturated with ocean moisture. Cazadero receives an average of 85 in (220 cm) of rain a year, and is reputed to be the second wettest town in California, after Gasquet.

This region experiences warm (but not hot) and dry summers, with no average monthly temperatures above 71.6 °F. According to the Köppen Climate Classification system, Cazadero has a warm-summer Mediterranean climate, abbreviated "Csb" on climate maps.

Cazadero is in a forested area where there is plant life, including redwoods, oaks and bay trees. Tanoak is also common and it is the principal species suffering from sudden oak death in the area. Research has implicated bay trees as a vector for sudden oak death. Bays (which are unaffected by the pathogen) frequently grow in close proximity to oaks and redwoods in coastal California. Rarer plants in the area include the calypso orchid (Calypso bulbosa), which can be found on the floors of redwood forests, fern glens and boggy areas in the area.

The area is home to a number of camps, including BSA Camp Royaneh, Camp Cazadero, and the Cazadero Performing Arts Camp. Plantation Farm Camp's mailing address is in Cazadero although it is located in unincorporated Sonoma County.

All content from Kiddle encyclopedia articles (including the article images and facts) can be freely used under Attribution-ShareAlike license, unless stated otherwise. Cite this article:
Cazadero, California Facts for Kids. Kiddle Encyclopedia.