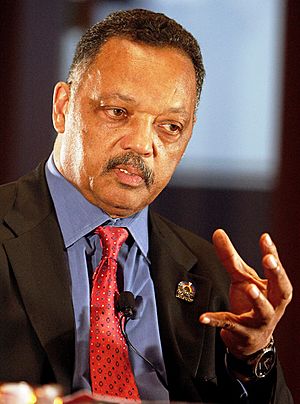 Jackson at the University of Chicago in 2009

Jackson was born Jesse Louis Burns, in Greenville, South Carolina. His mother, Helen Burns, was 16 years old at the time he was born. She never married his father, Noah Louis Robinson. When Jackson was two, his mother married Charles Jackson. Jesse was raised by his grandmother Matilda until he was 13. In 1957, he returned home when his step-father adopted him.

After he graduated from high school, Jackson had an offer to play professional baseball from the Chicago White Sox. He also received a scholarship to play college football at the University of Illinois, which he accepted. He later transferred to North Carolina A&T. He was one of Martin Luther King Jr.'s main organizers in Chicago for the Southern Christian Leadership Conferences. After King was shot, Jackson formed several civil rights organizations of his own. Two of these were Operation PUSH and the Rainbow Coalition. Jackson was also active in civil rights movements outside the United States. He also served as a Baptist minister. 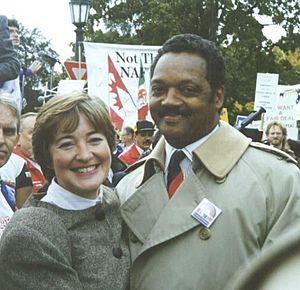 Jackson ran for President in 1984 and 1988, coming in second in the 1988 Democratic party. Both times, he ran on a very liberal platform that wanted people of all races to co-operate, as well as more emphasis on education, urban issues and infrastructure. He wanted to be chosen as the Democrat's Vice-Presidential nominee, but Lloyd Bentsen was chosen instead.

During the 1980s, he achieved wide fame as a politician, as well as becoming a well-known spokesman for civil rights issues.

Ebony Magazine named Jackson to its "100 most influential black Americans" list in 1971.

In 1979, Jackson received the Jefferson Award for Greatest Public Service Benefiting the Disadvantaged.

In 1989, he was awarded the Spingarn Medal from the NAACP.

In 2008, Jackson was presented with an Honorary Fellowship from Edge Hill University.

In an AP-AOL "Black Voices" poll in February 2006, Jackson was voted "the most important black leader".

All content from Kiddle encyclopedia articles (including the article images and facts) can be freely used under Attribution-ShareAlike license, unless stated otherwise. Cite this article:
Jesse Jackson Facts for Kids. Kiddle Encyclopedia.