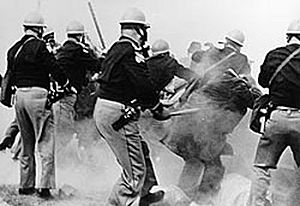 The marches from Selma to Montgomery, led President Lyndon B. Johnson to sign the Voting Rights Act of 1965. The first March occurred on March 7, 1965 and became known as Bloody Sunday. Between 500-600 civil rights protesters began the march on March 7 but were stopped by Sheriff Jim Clark. The Sheriff of Dallas County (where Selma is located) ordered that all white men over the age of 21 to report to the court house steps where he made them deputies and equipped them to counter the protesters. They were joined by state troopers and beat protesters so severely that 17 were hospitalized. They beat the protesters with night clubs, fired tear gas into the crowd, and charged them from horseback.

After the events were televised, President Johnson issued an order mobilizing the Alabama National Guard to protect the marchers on their 54 mile (87 km) journey from Selma to Montgomery, Alabama. This second march would start on March 21, 1965 and end on March 25, 1965 at the steps of the state capitol in Montgomery, Alabama. Before the second march even began President Johnson went to congress to ask them for a bill that would guarantee voting rights for all citizens and end discrimination at polling places (such as poll taxes and literacy tests).

All content from Kiddle encyclopedia articles (including the article images and facts) can be freely used under Attribution-ShareAlike license, unless stated otherwise. Cite this article:
Selma to Montgomery marches Facts for Kids. Kiddle Encyclopedia.