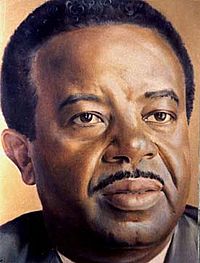 Ralph David Abernathy Sr. (March 11, 1926 – April 17, 1990) was an American civil rights activist and Baptist minister. He was ordained in the Baptist tradition in 1948. He was born in Linden, Alabama. He was a member of the Democratic Party.

As a leader of the civil rights movement, he was a close friend and mentor of Martin Luther King Jr. He worked with King to create the Montgomery Improvement Association which led to the Montgomery bus boycott.

He also co-founded and was an executive board member of the Southern Christian Leadership Conference (SCLC). He became president of the SCLC following the assassination of King in 1968. He led the Poor People's Campaign in Washington, D.C.

He was an advisory committee member of the Congress on Racial Equality (CORE).

All content from Kiddle encyclopedia articles (including the article images and facts) can be freely used under Attribution-ShareAlike license, unless stated otherwise. Cite this article:
Ralph Abernathy Facts for Kids. Kiddle Encyclopedia.