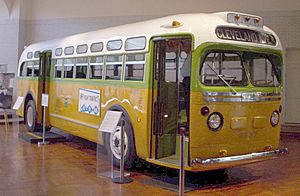 The bus where it all started.

The Montgomery Bus Boycott was a major event in the Civil Rights Movement. It occurred in Montgomery, Alabama where the city buses were segregated. Black passengers were required by law to ride in the back of the bus. On December 1, 1955 Rosa Parks, an African American woman, refused to give her bus seat to a white person. She was arrested and sent to jail. In protest about 40,000 black people boycotted the Montgomery city buses, refusing to ride. The boycott lasted 381 days. On November 13, 1956, the United States Supreme Court issued its decision to desegregate the buses. In response the city of Montgomery passed a law allowing black passengers to sit anywhere on the buses. The boycott ended on December 20, 1956. Many important people in the civil rights movement took part in the boycott. This included Reverend Martin Luther King, Jr. and Ralph Abernathy.

All content from Kiddle encyclopedia articles (including the article images and facts) can be freely used under Attribution-ShareAlike license, unless stated otherwise. Cite this article:
Montgomery Bus Boycott Facts for Kids. Kiddle Encyclopedia.