The National Civil Rights Museum is a complex of museums and historic buildings in Memphis, Tennessee; its exhibits trace the history of the civil rights movement in the United States from the 17th century to the present. The museum is built around the former Lorraine Motel, which was the site of the assassination of Martin Luther King Jr. in 1968; King died at St. Joseph's Hospital. Two other buildings and their adjacent property, also connected with the King assassination, have been acquired as part of the museum complex.

The museum reopened in 2014 after renovations that increased the number of multi-media and interactive exhibits, including numerous short movies to enhance features. The museum is owned and operated by the Lorraine Civil Rights Museum Foundation, based in Memphis. The Lorraine Motel is owned by the Tennessee State Museum and leased long term to the Foundation to operate as part of the museum complex. In 2016, the museum was honored by becoming a Smithsonian Affiliate museum. It is also a contributing property to the South Main Street Historic District of the National Register of Historic Places.

The site began as the 16-room Windsorlorrine Hotel around 1925 and was later known as the Marquette Hotel. In 1945, Walter Bailey purchased it and renamed it for his wife Loree and the song "Lorraine".

During the segregation era, Bailey operated the motel as upscale lodging that catered to a black clientele. He added a second floor, a swimming pool, and drive-up access for more rooms on the south side of the complex. He changed the name from Lorraine Hotel to Lorraine Motel. Among its guests through the 1960s were musicians going to Stax Records, including Ray Charles, Lionel Hampton, Aretha Franklin, Ethel Waters, Otis Redding, the Staple Singers and Wilson Pickett.

Martin Luther King, Jr., was shot at approximately 6:01 p.m. on April 4, 1968, a day after delivering his famous "I've Been to the Mountaintop" speech. Following the assassination of King, Bailey withdrew Room 306 (where King died) and the adjoining room 307 from use, maintaining them as a memorial to the activist leader. Bailey's wife, Loree, suffered a stroke hours after the assassination and died five days later. Bailey reduced the operation by converting the other motel rooms to single room occupancy for low-income residential use.

Bailey worked with Chuck Scruggs, program director of WDIA, and attorney D'Army Bailey, to raise funds to "Save the Lorraine". They worked with the Martin Luther King Jr. Memorial. The Foundation bought the motel for $144,000, following foreclosure in December 1984. In 1984, the group changed the name of their organization to the Lorraine Civil Rights Museum Foundation. The Lorraine finally closed as an SRO motel on March 2, 1988. Sheriff's deputies were needed to evict the last holdout tenant, Jacqueline Smith, in preparation for an $8.8 million overhaul. Walter Bailey, Lorraine Motel owner, died in July 1988, before getting to see the results of his efforts to establish the museum.

The Foundation worked with Smithsonian Institution curator Benjamin Lawless to develop a design to save historical aspects of the site. The Nashville, Tennessee firm McKissack and McKissack was tapped to design a modern museum on those portions of the grounds that were not directly related to the assassination.

The museum was dedicated on July 4, 1991, and officially opened to the public on September 28, 1991. D'Army Bailey was the founding president of the museum.

In 1999, the Foundation acquired the Young and Morrow Building, and its associated vacant lot on the West side of Mulberry, as part of the museum complex. A tunnel was built under the lot to connect the building with the motel. The Foundation became the custodian of the police and evidence files associated with the assassination, including the rifle and fatal bullet. The latter are on display in a 12,800 sq. foot exhibit in the former Y & M building, which opened September 28, 2002.

Renegotiation of lease with state in 2007

Through the years, there has been controversy over composition of the board of the museum Foundation and of the mission of the museum, as people have differing opinions. These issues came to a head in December 2007, as the museum foundation was asking the state, which owned the property, to extend its lease for 50 years rent-free. Bailey, a circuit court judge, said he was disappointed with the museum's emphasis on history. He said that he had envisioned it as an institution to inspire activism. By 2007, members of the board included whites from the corporate world. Bailey and other community activists criticized the board as "too white" and claimed they were shutting out the community. Beverly Robertson, then director of the museum, defended the board and the museum's operation.

Gregory Duckett, a board member, disagreed with Bailey's interpretation, saying the museum was never designed as an activist institution. Robertson noted that many board members were African Americans who had been activists and also entered corporate life. In 2007, the state agreed to a 20-year lease, while taking over major maintenance of the complex. It required the museum board to hold annual public meetings and increase the number of African-American board members. 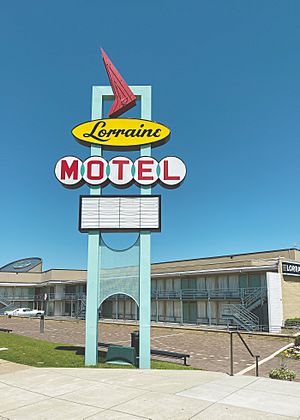 The main museum closed in November 2012 for a $27.5 million renovation, to include changes to exhibits and upgrades to building systems. The exhibits were updated for historical accuracy and to add to their evocative power; the work was guided by a group of recognized civil rights scholars. The building's renovations included replacement and repair of the HVAC and mechanical systems, expansion of the lobby, and creation of a new educational center. Many of the museum's most popular exhibits did not change, such as Room 306 (where Dr. King was staying when he died), the replica sanitation truck (Dr. King came to Memphis to support an AFSCME sanitation workers' strike), and the replica of the bus Rosa Parks rode in Montgomery, Alabama, before initiating the Montgomery bus boycott of 1955–56. The original bus resides at the Henry Ford Museum in Dearborn, Michigan.

In the 2014 reopening, a major new exhibit featured is a replica of the U.S. Supreme Court room where oral argument was heard in 1954 in the seminal Brown v. Board of Education, in which the Court ruled that segregation in public schools was unconstitutional. This was a major victory for the civil rights movement. The museum has several interactive kiosks where patrons can access audio, images, text and video about the full civil rights movement. Visitors can search for text based on event, location, or theme. Many exhibits now feature "listening stations" where patrons with headphones can hear audio about the exhibit they are seeing; one features the voice of Malcolm X in a debate. More than 40 new short films throughout the museum also enhance the effect of the exhibits. In addition, museum presentations stress that the work continues; this is history that is part of the present; for instance, with challenges continuing on voting rights and other civil rights.

The renovated museum opened to the public on April 5, 2014. The Associated Press review said, "The powerful, visceral exhibit[s set] the tone for an evocative, newly immersive museum experience that chronicles the history of the civil rights struggle in America." King scholar Clayborne Carson of Stanford University said that the museum's renovations present "the best and most recent scholarship on civil rights available today". 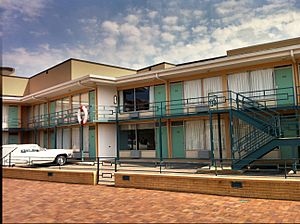 SW-NE view of the site

The main museum is located on the south edge of downtown Memphis in what is now called the South Main Arts District. It is about six blocks east of the Mississippi River. The main 4.14-acre (16,800 m2) site includes the museum, the Lorraine Motel, and associated buildings. The museum also owns the Young and Morrow Building at 422 Main Street. 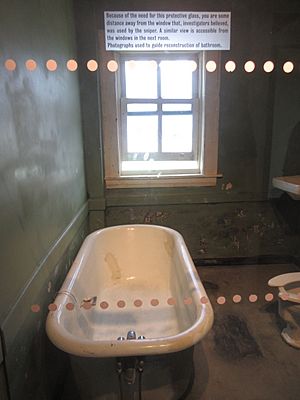 This was where James Earl Ray initially confessed (and later recanted) to shooting King. The complex includes Canipe's Amusement Store at 418 Main Street, next to the rooming house where the murder weapon with Ray's fingerprints was found. Included on these grounds is the brushy lot that stood between the rooming house and the motel. 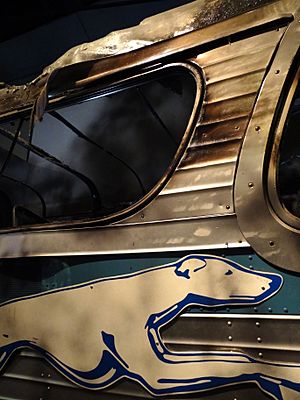 The museum exhibits a number of vehicles of historic value or which are otherwise relevant to the time period. Vehicles on display include an International Harvester garbage truck in an exhibit on the 1968 Memphis sanitation strike that brought King to Memphis, James Earl Ray's 1966 white Ford Mustang, a 1968 Cadillac and 1959 Dodge parked outside the motel, a re-creation of the burned shell of a Greyhound bus used by Freedom Riders, and a bus representative of the Montgomery bus boycott. 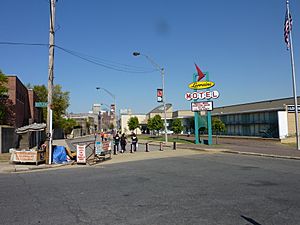 Jacqueline Smith protest vigil outside the Lorraine in October 2010

At the end, the Lorraine Motel housed temporary guests and residents as an SRO. The last resident was Jacqueline Smith, who had lived there since 1973 while working for the motel as a housekeeper. When the motel was closed in 1988, Smith was evicted. The neighborhood at the time around the Lorraine Motel was a lower-income, predominantly black area. The reconstruction of the neighborhood was related to other urban redevelopment projects in the downtown area. and the inclusion of the museum in the arts district. Smith and many others claim that the museum, as well as other components of urban redevelopment and the growth of the historical tourism industry, contributed to the gentrification of the South Main St. area. Smith argues that Dr. King would have likely preferred efforts to support struggling communities in Memphis, rather than projects that further uproot and alienate them.

Smith's belongings were piled across the street where she covered them with a tarp and set up camp and continued to live as she daily maintains her protest vigil to this day. As of November 29, 2018 she has held vigil for 30 years 308 days. She believes that by focusing too heavily on the violence of Dr. King's death instead of the work he did while alive, the museum is projecting precisely the opposite message Dr. King was attempting to spread. Corretta Scott King shared the view that focusing on Dr. King's violent death creates a narrative that precludes his vision and message of peace.

She thought King would have objected to having $27 million spent on a building for him and to evicting motel residents, instead of on investing in policies and programs that would help communities of color and poor communities. Since her vigil began, Smith has spoken to thousands of visitors, attempting to spread Dr. King's message and explain her thoughts about the museum. Smith has continued her protest vigil for over 30 years.

All content from Kiddle encyclopedia articles (including the article images and facts) can be freely used under Attribution-ShareAlike license, unless stated otherwise. Cite this article:
National Civil Rights Museum Facts for Kids. Kiddle Encyclopedia.