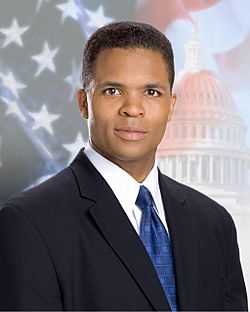 Jesse Louis Jackson Jr. (born March 11, 1965) is a former American politician. He was a Democratic Congressman. He represented Illinois' 2nd conressional district in the United States House of Representatives from 1995 to his resigning in 2012. Jackson Jr. is the son of activist and former Presidential candidate Jesse Jackson.

Prior to his career in office, Jackson Jr. worked for his father in both the 1984 presidential campaign and his social justice, civil rights and political activism network, Operation PUSH.

Jackson Jr. was a national co-chairman of the 2008 Barack Obama presidential campaign.

All content from Kiddle encyclopedia articles (including the article images and facts) can be freely used under Attribution-ShareAlike license, unless stated otherwise. Cite this article:
Jesse Jackson Jr. Facts for Kids. Kiddle Encyclopedia.