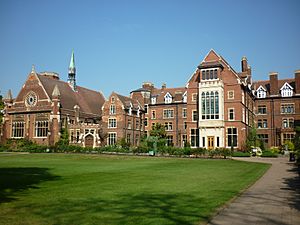 Homerton College is one of the colleges of the University of Cambridge, England. Its name comes from the area of Homerton in London. It was first formed there in 1850 from a group of students who wanted to change the way pedagogy (how people teach) was studied. They moved to Cambridge in 1894, but the college only became part of the University in 1976. Only in 2010 it was given the full status.

Homerton College is the biggest in Cambridge: it has 1200 students. Many of them study Education because the department is there. The college is not in the city centre of Cambridge but on Hills Road.

All content from Kiddle encyclopedia articles (including the article images and facts) can be freely used under Attribution-ShareAlike license, unless stated otherwise. Cite this article:
Homerton College, Cambridge Facts for Kids. Kiddle Encyclopedia.