From early January 2019, Venezuela has been experiencing a Presidential crisis, with unclear leadership and terms of Presidency.

Despite encouragement to resign as president when his first term expired on 10 January 2019, Nicolás Maduro inaugurated himself. This resulted in widespread condemnation, the National Assembly invoking a State of emergency, and nations removing their embassies from Venezuela. With their belief that his election was illegitimate, they claimed that by retaking power, Maduro was converting Venezuela into an illegal de facto dictatorship. 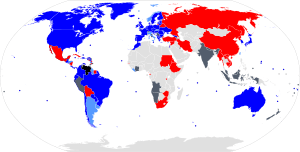 Maduro's government states that the crisis is a "coup d'état led by the United States to remove him from power and control the country's oil reserves."

All content from Kiddle encyclopedia articles (including the article images and facts) can be freely used under Attribution-ShareAlike license, unless stated otherwise. Cite this article:
2019 Venezuelan Presidential crisis Facts for Kids. Kiddle Encyclopedia.