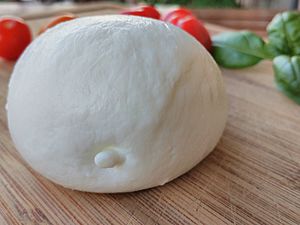 The TSG certification does not specify the source of the milk, so any type of milk can be used. In Italy, mozzarella made with the milk of the Italian water buffalo is an important variety. The Italian buffalo mozzarella sold as Mozzarella di Bufala Campana is protected under the EU's Protected Designation of Origin scheme and may only be produced in select locations in the regions of Campania, Lazio, Apulia and Molise.

Fresh mozzarella is generally white, but may vary seasonally to slightly yellow depending on the animal's diet. Due to its high moisture content, it is traditionally served the day after it is made, but can be kept in brine for up to a week or longer when sold in vacuum-sealed packages. Low-moisture mozzarella can be kept refrigerated for up to a month, though some shredded low-moisture mozzarella is sold with a shelf life of up to six months. Mozzarella of several kinds is also used for most types of pizza and several pasta dishes, or served with sliced tomatoes and basil in Caprese salad.

All content from Kiddle encyclopedia articles (including the article images and facts) can be freely used under Attribution-ShareAlike license, unless stated otherwise. Cite this article:
Mozzarella Facts for Kids. Kiddle Encyclopedia.