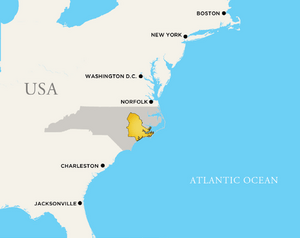 New transitions are being made in the geography of the economic sectors. Economic Development Commissions are transforming, such as North Carolina's Eastern Region Commission's transition into North Carolina East Alliance. Different EDC's have different ways to increase prosperity in the area. NCEA's first focus is to improve the talent pipeline to create a more comprehensive local workforce. Shoop, the Commissioner for Washington's EDC stated "In a private setting, they would be able to access different funds for additional economic projects or initiatives in the county."

Located east of the Piedmont and west of the Atlantic Ocean, Eastern North Carolina contains very few major urban centers. Greenville is close to the region's geographic center. Fayetteville is the largest city in the region, followed by Wilmington and Greenville.

Eastern North Carolina is roughly made up of the 44 easternmost counties in North Carolina. Generally, the region denotes all of the state's counties on and east of Interstate 95 (also known as East Coast USA Main Street stretching from northern Maine to the southern tip of Florida). If defined by geological formations, eastern North Carolina comprises the 44 counties of the Inner and Outer Coastal Plains. In terms of economic similarities, the region includes 41 counties. The commonly accepted definition is all counties east of and crossed by Interstate 95, which is 41 counties. I-95 intersects with US64/264 at Wilson County and is in close proximity to I-40. This makes transportation throughout the region incredible along with easy access to the rest of the state and country. The region is further divisible into three geographic sections: the Southeast, Inner Banks and the Outer Banks.

During the colonial era of American History, the East was the dominant region of North Carolina in both government and commerce. Towns of early significance included Bath, Beaufort, Elizabeth City, Edenton, Kinston, Morehead City, New Bern, Tarboro, and Wilmington. Around the end of the eighteenth century, however, such dominance shifted to the Piedmont center of the state.

Eastern North Carolina is served by two main interstate highways and a number of U.S. routes.

Over 60 motor freight carriers provide service to all parts of the nation.

FedEx, UPS, DHL and Emery have offices in all major communities.

The transportation within the region allows for easy access to anywhere in the entire United States of America. I-40 and I-95 are capable of this with close proximity to I-85 as well. Manufacturers can move their goods efficiently and families can travel with ease.

Much of the regions main highways have been designated as the Historic Albemarle Tour, which connects many historic sites in Eastern North Carolina.

CSX, Norfolk Southern, and the NC Railroad Company serve the industries within the region. The National Railroad Passenger Corporation, Amtrak, is a train service for passengers. Amtrak passenger stations are located in Rocky Mount, Wilson and throughout North Carolina and the Eastern region

Eastern North Carolina is by and large an impoverished area. Nearly 21 percent of people live in poverty in this region. Outsourcing of textile manufacturing jobs along with other manufacturing jobs has caused unemployment in the area to increase particularly in the northeastern area of the state. Many areas of Eastern North Carolina are experiencing little economic growth; however, areas such as Greenville (Pitt County) are growing rapidly due the location of East Carolina University and its associated medical facilities.

Eastern North Carolina is located in the coastal plain region of the eastern seaboard of the United States and has relatively flat land that is primarily used for farming. The Outer Banks and Inner Banks are comparable to the tidewater region of Virginia in terms of land. However, the barrier islands of the Outer Banks are highly rare.

Eastern North Carolina generally consists of 43 counties, which when combined form a total regional area of roughly 9,700 square miles (25000 square km). The counties commonly included in the region are as follows:

Eastern North Carolina communities in the region include:

All content from Kiddle encyclopedia articles (including the article images and facts) can be freely used under Attribution-ShareAlike license, unless stated otherwise. Cite this article:
Eastern North Carolina Facts for Kids. Kiddle Encyclopedia.