Tarboro is a town located in Edgecombe County, North Carolina, United States. It is part of the Rocky Mount Metropolitan Statistical Area. As of the 2020 census, the town had a population of 10,721. It is the county seat of Edgecombe County. The town is on the opposite bank of the Tar River from Princeville. It is also part of the Rocky Mount-Wilson-Roanoke Rapids CSA. Tarboro is located near the western edge of North Carolina's coastal plain. It has many historical churches, some dating from the early 19th century.

Tarboro was chartered by British colonists in 1760. Located in a bend of the Tar River, it was an important river port, the head of navigation on the Tar River just east of the fall line of the Piedmont. As early as the 1730s, a small community developed around this natural asset. With different businesses, a church, a jail, two warehouses, a courthouse, a few well built private houses, together with a score of "plain and cheap" houses, made a bustling village by the late 1700s.

Natives and longtime residents use the pronunciation "Tar-Ber". The pronunciation is sometimes used as a shibboleth, as outsiders (and newcomers) tend to pronounce the town's name as it is spelled "Tar-Borough".

Created in 1760, Tarboro is the ninth-oldest incorporated town in North Carolina. Situated on the Tar River at the fall line in the Piedmont, the town served the area as an important colonial river port. It was a thriving trade center until the Civil War.

Scholars believe that the area around Tarboro was settled by 1733, but Edward Moseley's map of that year indicates only Tuscarora Native Americans, an Iroquoian-language speaking group. By 1850, the area was widely known as "Tawboro", a name attributed to Taw, the Tuscaroran word for "river of health".

"Tarrburg", as the town was called on maps of 1770–75, was chartered November 30, 1760, as "Tarborough" by the General Assembly. In September of the same year, Joseph and Ester Howell deeded 150 acres (610,000 m2) of their property to the Reverend James Moir, Lawrence Toole (a merchant), Captains Aquilla Sugg and Elisha Battle, and Benjamin Hart, Esquire, for five shillings and one peppercorn. As commissioners, these men laid out a town with lots not exceeding 0.5 acres (2,000 m2) and streets not wider than 80 feet (24 m), with 12 lots and a 50-acre (200,000 m2) "common" set aside for public use. Lots were to be sold for two pounds, with the proceeds to be turned over to the Howells; however, full payment was not received for all of the 109 lots sold, and some were not sold for the 40 shillings price.

After Halifax County was withdrawn from Edgecombe County in 1758–59, the original county seat of Enfield was within Halifax.

Tarboro officially became the county seat of Edgecombe in 1764. For four years the county government met in Redman's Field. The North Carolina State Legislature met here once in 1787 and again in 1987. President George Washington is known to have slept in Tarboro during a visit on his 1791 Southern tour. He is noted to have said of the town that it was "as good a salute as could be given with one piece of artillery."

According to the book, Edgecombe County: Twelve North Carolina Counties in 1810–11, by Dr Jeremiah Battle, the following is an 1810 account of the town:

"Tarboro, the only town in the county, is handsomely situated on the south-west bank of Tar River, just above the mouth of Hendrick's Creek, in lat. 35 deg. 45 min. It is forty-eight miles west by north from Washington, thirty-six south of Halifax, eighty-three northwest of Newbern, and sixty-eight east of Raleigh. It was laid off into lots in the year 1760. The streets are seventy-two feet wide, and cross each other at right angles, leaving squares of 2 acres (8,100 m2) each. These squares being divided into lots of 0.5 acres (2,000 m2), makes every lot front or face two streets.

"There are about fifty private houses in it; and generally from fifteen to twenty stores, a church, a jail, two warehouses, and a large Court House, which in the year 1785 was used for the sitting of the State Legislature. There are several good springs adjacent to the town, but for culinary purposes almost every person or family has a well; and some of these wells afford good water the greater part of the year. This place affords good encouragement to all industrious persons, particularly merchants of almost every description. Sixty or seventy merchants have had full employment here at one time. But such of them as have emigrated to this place have too soon found themselves in prosperous situations, and have betaken themselves to idleness and dissipation."

Due to the development of cotton plantations worked by slave labor in the antebellum years, by the 1870s Halifax and Edgecombe counties were among several in northeast North Carolina with majority-black populations. Before being disfranchised by the Democrats' passage in 1899 of a new state constitution that included discriminatory provisions, black citizens elected four African Americans to the US Congress from North Carolina's 2nd congressional district in the last quarter of the nineteenth century, as well as many blacks to local offices. Congressman George Henry White, a successful attorney, lived in Tarboro. After passage of the disfranchising constitution, he left the state, stating it was impossible for a black to be a man there. He became a successful banker in Washington, DC, and Philadelphia, Pennsylvania.

The federal Voting Rights Act of 1965 provided for oversight and enforcement of the constitutional rights of African Americans to vote. They have since been able to participate again in political life in North Carolina. 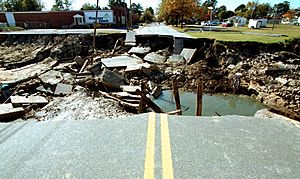 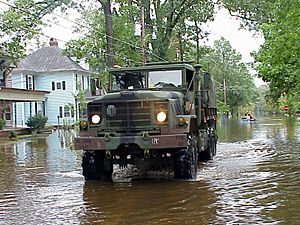 Hurricane Floyd was a very powerful Cape Verde-type hurricane which struck the east coast of the United States. It was the sixth named storm, fourth hurricane, and third major hurricane in the 1999 Atlantic hurricane season. Floyd triggered the third largest evacuation in US history (behind Hurricane Gustav and Hurricane Rita, respectively) when 2.6 million coastal residents of five states were ordered from their homes as it approached. The Cape Verde-type hurricane formed off the coast of Africa and lasted from September 7 to September 19, peaking in strength as a very strong Category 4 hurricane—just 2 mph short of the highest possible rating on the Saffir–Simpson Hurricane Scale. Flooding in Tarboro mostly occurred in areas around the Tar River, exceeding 500-year flood levels along its lower stretches; it crested 24 ft (7.3 m) above flood stage. The Tar river surrounds about half of Tarboro has it touches the North end and Southern ends of the city. Flooding began upstream in Rocky Mount, as much as 30% of which was underwater for several days. In Tarboro, much of the downtown was under several feet of water. Nearby, the town of Princeville was largely destroyed when the waters of the Tar poured over the town's levee, covering the town with over 20 ft (6.1 m) of floodwater for ten days. Part of the Tarboro and Princeville city limits are defined by the Tar River.

Recognized by the National Park Service in 1977, the 45-block Tarboro Historic District boasts over 300 structures from the residential dwellings to historic churches to original 19th-century storefronts along Tarboro's Main Street. The gateway to the Tarboro Historic District is the Tarboro Town Common, a 15-acre (61,000 m2) park canopied by tall oaks and including war memorials. The Town Common originally surrounded the town and is the second-oldest legislated town common in the country. 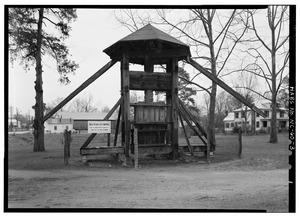 Within the historic district is the Blount-Bridgers House, an 1808 Federal-style mansion that houses several important document collections and works by Hobson Pittman, a nationally recognized artist and Tarboro native. Opened as a museum in 1982, the Blount-Bridgers House serves as the town's art and civic center. A Historic District National Recreation Trail beginning at the Blount-Bridgers House guides visitors through the scenic older neighborhoods of the town. The district includes five 18th-century homes, with the oldest being the Archibald White house (ca. 1785) located on the corner of Church and Trade streets. Over two dozen antebellum homes from 1800 to 1860 grace the district. The largest section is late 19th-and early 20th-century and includes Victorian, Second Empire, Neo-classical revival, and arts and crafts style homes. The town's walkable downtown is recognized by the National Trust for Historic Preservation's Main Street Program.

Also within the historic district, at the cross of North Church Street and Albemarle Avenue, is the Tarboro-Edgecombe Farmers' Market. The market operates on Tuesdays and Fridays from 7 am to 10 am, and Saturdays from 8 am to 11 am. A variety of events, including the Tarboro Commons Festival and the Blueberry Day, are celebrated in downtown.

Interstate 95 and U.S. 64 were constructed near Tarboro, allowing for access to and from the East Coast's major markets, many of which are within one day's drive. The city is 72 miles (116 km) east of Raleigh, the state capital; 25 miles (40 km) northwest of Greenville, a primary eastern North Carolina hub; 16 miles (26 km) east of Rocky Mount; and 120 miles (190 km) west of the Outer Banks. Tarboro is convenient to area and regional airports, freight and passenger train service, interstate and intrastate highway systems, and the deepwater ports of Morehead City and Wilmington, North Carolina.

Tarboro-Edgecombe Airport: This facility, located 3 miles (5 km) north of downtown, has a 4,500-foot (1,400 m) paved and lighted runway with a 1,000-foot (300 m) approach apron from both ends, accommodating a wide variety of small general aviation aircraft.

Tarboro has access to both freight and passenger rail service. Amtrak provides two north and two southbound trains per day at its Rocky Mount station, located 17 miles (27 km) west of Tarboro. Service is to Washington, D.C., New York City, Miami and Philadelphia. Freight service is provided by CSX. Trains travel to destinations in eastern North Carolina and also to points west and south of town.

The population of Tarboro has steadily grown over the past three decades while the overall population of Edgecombe County has declined.

Vidant Hospital is a full-service, 117-bed acute care facility where residents of Tarboro, Edgecombe County and surrounding communities receive a wide range of health services close to home. Vidant Hospital was once Heritage Hospital but Vidant bought Heritage in 2011. In 1998, Heritage joined University Health Systems of Eastern Carolina. More than 20 specialties are represented by Vidant's medical staff. In addition to acute care, services include rehabilitation, oncology and outpatient clinics.

Chinese tiremaker Triangle Group will be building two manufacturing facilities at a 1,449-acre site in Edgecombe County at Kingsboro Business Park, located between Rocky Mount and Tarboro. Phase 1 of the project is set to open in 2020 and phase 2 in 2022. At $580 million, it will be the largest ever manufacturing investment in rural North Carolina with the creation of 800 jobs and an estimated contribution of more than $2.4 billion to the state's economy. Corning has also constructed a new $86 million distribution center that will bring 111 new jobs, they will be operational in the first quarter 2020.

Below is a list of some of the largest employers in Tarboro as of 2019.

All content from Kiddle encyclopedia articles (including the article images and facts) can be freely used under Attribution-ShareAlike license, unless stated otherwise. Cite this article:
Tarboro, North Carolina Facts for Kids. Kiddle Encyclopedia.