Arapahoe is a town in Pamlico County, North Carolina, United States. As of the 2010 census, the town population was 556. Arapahoe shares many of its roles and duties with Minnesott Beach, North Carolina. It is part of the New Bern, North Carolina Micropolitan Statistical Area.

Arapahoe was founded a few years after New Bern, North Carolina by settlers leaving the New Bern colony. This area was settled in 1703 on the old Indian trail from the big bend in the river heading west to Core Point. The community was called “Bethany Crossroads”. That Indian trail is still in use today but is now called North Carolina Highway 306. In 1886 Bob Hardison, after discussing it with his friend Bob Bowden decided to apply to the U.S. Postal Department for a Post office to be located at “Bethany Crossroads” in Pamlico County. They filled out an application and both signed it. When it was returned to them it was addressed to “Bob’s Town”, the reason being that there was already a “Bethany Crossroads” in the vicinity of Fayetteville. Neither of the Bobs liked “Bob’s Town” so they had to come up with a different name. After a lengthy discussion Bob Hardison said “Well if you have no objection, we will name it after my old white horse, Arapahoe.” So it was decided and a new application filed. It was likely a year or longer before all paperwork was completed, but “Bethany Crossroads” was no more and there by named the Town of Arapahoe.

A project currently under consideration is a bridge that would span the Neuse River connecting Minnesott Beach to Havelock. This project, on the state of North Carolina transportation hotspots, was recently pushed back into holding status while other projects are re-arranged to better use the new revised budget.

Though not within the city limits, there are sub-regions of Arapahoe. These areas include Holt's Chapel, Kershaw, Janerio, Dawson's Creek, Taylor's Neck, and Cash Corner. Dawson's Creek area is the basis for Kevin Williamson's WB television show.

The major means for transportation in Arapahoe is by car. There are currently no taxi service, mass transportation, or airline service within the Araphoe geographic district. The closest airport to Arapahoe is Craven Regional Airport, serviced by US Airways Express with eight times daily service to Charlotte. Delta Connection has service to Atlanta with twice daily service (three times daily summer service). Ferry service is also available from the North Carolina Ferry System with service from Minnesott Beach to Cherry Branch / Havelock every 20 minutes. 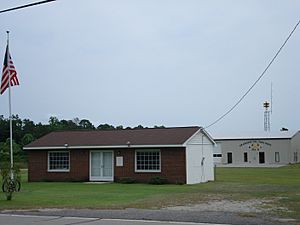 There were 188 households out of which 26.6% had children under the age of 18 living with them, 54.8% were married couples living together, 9.6% had a female householder with no husband present, and 31.4% were non-families. 27.1% of all households were made up of individuals and 16.0% had someone living alone who was 65 years of age or older. The average household size was 2.32 and the average family size was 2.75.

New Developments in Arapahoe include the following: 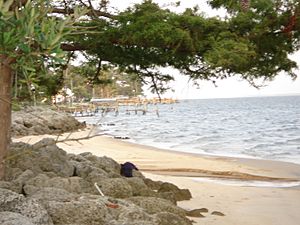 3. A new housing community located at Dawson's Creek called Dawsons Landing. This development is currently in pre-sale with over 100 lots available.

4. A new housing community located on Hwy 306S in Arapahoe. The development, called Arlington Place, is located on the Burts Farm Development and will contain as many as 1200 homes, boat docks, and a community center. Currently Phase 1 of Arlington Place has been sold to the 80% mark.

5. A water path has been developed for kayakers and paddlers to traverse the rivers, streams, and sounds of Pamlico County. Pamlico Paddle recently announced a fall event on October 20, 2007 where paddlers enjoy the paddle paths around Pamlico County. During the 2005 event, over 75 paddlers joined the event.

6. A Medical and Retail center is being developed at the old Arapahoe Elementary School building.

7. Other current developments include a gas/convenience store and a hotel in Minnesott Beach.

All content from Kiddle encyclopedia articles (including the article images and facts) can be freely used under Attribution-ShareAlike license, unless stated otherwise. Cite this article:
Arapahoe, North Carolina Facts for Kids. Kiddle Encyclopedia.